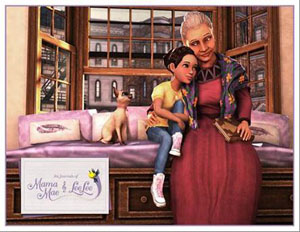 Loosely based on her relationship with her Nana, 14-time Grammy Award winner Alicia Keys unveils an interactive storybook app, “The Journals of Mama Mae and LeeLee.” Keys and AK Worldwide have partnered with Bento Box Interactive to create an imaginative tech tool that encourages children to explore through storytelling, games, music and limitless creativity. The app, which is centered on a young girl in New York City named LeeLee and the relationship she has with her wise grandmother, Mama Mae, is available now for download from the Apple App Store for $3.99.

In an interview with BlackEnterprise.com a month before the release of her fifth album, Girl On Fire, the songstress chats with Black Enterprise correspondent Shannon LaNier about the inspiration behind the app, her role as app developer and what her 2-year-old son Egypt thinks of “The Journals of Mama Mae and LeeLee.”