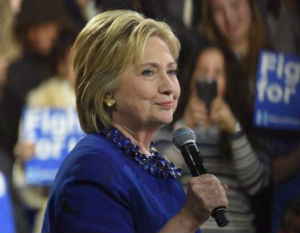 Let me be blunt; Hillary Clinton winning the popular vote does not matter.

To those questioning the fairness of Clinton losing the election, despite getting more than 1.5 million more votes than Donald Trump, it’s time to come out of the denial phase of grief and handle the truth.

I wanted her to win, too. But, Clinton knows how the electoral system and the electoral college works. It was her job to work it to her advantage. Every vote counts. However, that doesn’t mean your candidate will win.

How about this: Team Clinton blew a game she should have mastered a long time ago–twice. She was up against two totally different opponents, and rookies at that. On paper, she should have won both times. However, Barack Obama blew by her from the left to win the Democratic nomination in the 2008 presidential race, and Trump passed her from the right to win in the home stretch eight years later.

In both cases, Clinton knew the rules when she got into the game. In fact, she’s been at this for at least as long, if not longer, than any of the 2016 presidential candidates of either party. And according to the rules, the game is won by electoral votes, Clinton winningÂ the popular vote not withstanding.

Clinton Piled Up the Most Yardage, but Trump Scored the Most Points–Game Over

The presidential race is not the last game of the season, it’s the kick-off in the competition to determine America’s future. Can we stop bitching about the rules and stop complaining about how blind the refs are as well as our opponent’s dirty plays? Yes, the Seahawks should have given the ball to Beast Mode, but the Patriots have that Lombardi. Stop pointing at the scoreboard!

The preseason ends with Trump’s inauguration in January. We all need to be focused on getting ready!

Stop focusing on Clinton winning the popular vote, as if the final stats are more important than the final score. Â It’s time to stop analyzing and start strategizing.

BE GLOBAL: This Nigerian Entrepreneur Says Your Coconut Water Is Finished