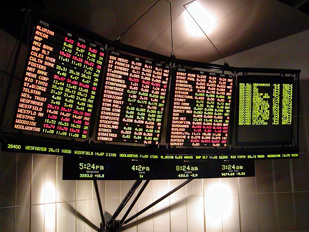 The Dow Jones Industrial Average plummeted more than 530 points Friday to close at 16459.75.Â  The Dow’s more than 1,000 point drop this week was the largest weekly drop since October 2008.Â  All major U.S. stock indices fell, with the technology company laden NASDAQ, dropping more than 170 points and the S&P 500 falling nearly 65 points.

[RELATED: Is the Chinese Stock Market Hurting Your 401(k)?]

It was not just U.S. stocks, markets around the globe including shares in Europe and Asia tumbled as investors sold in response to signs the Chinese economy is slowing down.Â  In addition to recent data showing a slowdown in Chinese consumer and manufacturing activity, the Chinese government caught market players off guard last week when they devalued the country’s national currency, the yuan, partially in an effort to make Chinese goods cheaper overseas and boost demand.

U.S. investors are also worried that a weaker Chinese economy means consumers there won’t buy as many American made goods.

U.S. stocks are dangerously close to being 10% off their highs which signals a correction — a temporary decline interrupting an uptrend in the markets.

“This is one. There have been 12 since the start of this bull run, which began in 2009.Â  The story is all about China, but this is no time to panic,â€ he adds.

Investors are also nervous that the Federal Reserve will raise interest rates in September.Â  The Fed raises rates in order to stave off inflation. Rates have been at historic lows for years, however, as Central Bankers try and support the economy.

“It’s 50/50 at best that the Federal Reserve will raise rates in September, with the markets so unstable. They’d like to make a move, however. I think if the markets stabilize, they will,â€ says Hogan.

While falling stock prices are hard to watch, investors need to remember not to panic.Â  You don’t lose a penny until you sell.