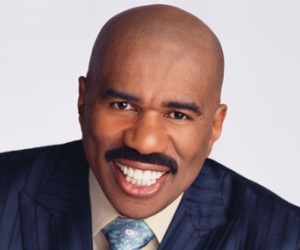 Two of the biggest names in television are joining forces. ABC Shark Tank Producer Mark Burnett andÂ Steve HarveyÂ are teaming up for a new business competition series at ABC, according to a statement released by the Hollywood Reporter. For ABC, the decision to dive further into the business world is no surprise, given Shark Tank‘s success for the network. The series, now in its seventh season, has been a solid performer Fridays, notes HR.

The untitled series brings together rival entrepreneurs who competitively pitch their ideas head-to-head in front of a live studio audience. The audience then votes on which entrepreneur will receive funding for his or her idea. Harvey, who will serve as host, will become the “funder of dreams,â€ as he brings his personal business experience and encouragement.

ABC has ordered 13 episodes of the series to debut later this year. For Harvey, this comes off the success of Little Big Shots, which ranks as the biggest reality broadcast launch in nearly five years. He also hosts Celebrity Family Feud, which was a surprise hit for ABC last summer and was renewed for a second season. Harvey is repped by WME. Harvey, arguably the hardest working man in show biz, earlier added The Miss Universe Pageant iconic brand to his hosting rÃ©sumÃ©.

The ability to seize new opportunities has helped Harvey in his 30-year transformation from a standup comic to a successful businessman. He shares his comedic showbiz journey and talks about how he turned millions of laughs into a multimillion-dollar empire in the December 2015/January 2016 issue of Black Enterprise magazine. He also opens up about his business partnership with his friend of 20 years Gregory Calhoun, CEO of Calhoun Enterprises (No. 35 on the BE INDUSTRIAL/SERVICE COMPANIES list with $106.6 million in revenues). What’s more, Harvey was a keynote speaker at the 2015 Black Enterprise Entrepreneurs Summit.

MGM Television will produce and distribute the new competition series. Burnett will serve as executive producer. This will be Burnett’s fourth series on ABC, joining fellow business unscriptedÂ series Shark Tank and spinoff Beyond the Tank as well as game showÂ 500 Questions.Â His many other credits include Survivor and The Voice.Â

“My dream has been to workÂ with Steve, and this is the perfect project for us to do together,â€ Burnett said in a statement. “He is an amazing talent and has an enormous heart for entrepreneurs, some of whom will get their business jump-started because of him.â€

Added Harvey: “I’m thrilled to have another passion project on the ABC schedule. This is just the type of show that gives folks a vehicle to breathe life into their dreams.â€