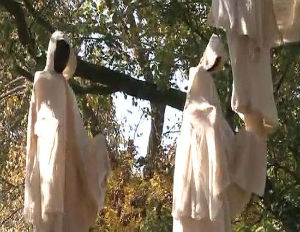 Think this is spooky? ID thieves are even scarier "ghosts." An exhibit at the St. Louis Zoo called “Boo at the Zoo” was taken down after a patron complained that the exhibit of 10 ghosts with black faces hanging from treesÂ looked like lynchings.

Zoo officials said the ghosts were meant to look faceless – and that a light in their heads –Â  lit up at night. But during the day, only their black faces were visible, which, officials say, gave the wrong impression.

The complaining patron, however, said “It’s impossible that you could not see that that’s not racist.”