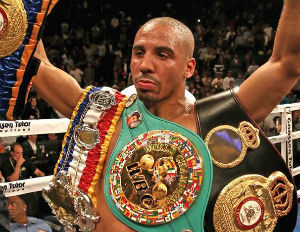 You’re a Brand Jordan guy. How are you fitting in and what’s your take on your experience so far?

Their culture matches Michael Jordan’s mindset as a player, which is that you have to earn everything. He had to earn his contract. When I first came out of the Olympics, I got my first deal but I didn’t really understand the magnitude of it. But I appreciate it more now. The contract ran out and years went by when there was no deal, but we were able to do another one right before the Chad Dawson fight. It’s a significant deal. It’s a blessing. I’ve got the greatest basketball player of all-time supporting me. I also get to see how the business is run, which I’m very interested in. Also, it’s an opportunity for me to make money without taking any punches. That’s what it’s about to me. Yes, I’m happy with what I’m going to earn in the ring, but what kind of earning power do I have outside the ring? To be associated with a brand like this is great. They don’t give away money.

I take my hat off to Jeff Fried, who is a good friend of mine. He helped facilitate and negotiate that deal. Larry Miller who is the president and everybody associated with the brand. It makes me proud to know that I have a relationship with it.

Can you go to them for anything?

I feel like it’s a family. Jordan Brand is on the campus of Nike. And they have a fraction of the employees. But that’s by design. When I was getting ready for my last fight, I came into a boardroom like this but a lot smaller.

First, I was with two or three people from the apparel team. We went over what we wanted the outfit to look like. They had this intensity, like, you’re going to have the best uniform anybody’s ever seen. Then the footwear team comes. Larry Miller’s office is right there. Howard White’s office is right there. It’s a family. I’m by far not the biggest athlete on the roster but they treat me like I am. My team had their own warm-ups, shoes, bags, socks. Everything was neatly put in there — everything they do is first-class. If they have to hand deliver it they’ll do that. They called to make sure everything was top-notch. It’s everything that people say that it is. But it’s a family, though.

Hearing you talk about this you’re obviously very passionate about having the opportunity. Do you think athletes take endorsements for granted?

It’s possible. But the guys I look at — the LeBrons, the [Kevin Durants], they talk business. These guys are cognizant and aware of where their money’s going and what they want to invest in. I think today’s modern athlete is no longer ignorant about the way money works. You have research at your fingertips.

Plus, my generation has seen what happened to guys back in the day. I’m not trying to be on 30 for 30 being broke. So guys have wisened up. Who wants to be that negative example. So, more athletes appreciate things a lot more and are trying to maximize these things they get. Guys aren’t willing to just get paid to wear a shoe. They’re now saying give me my own line. Then maybe that can parlay into another. I just saw LeBron’s wife just open up … —

Yeah! That’s big. That has nothing to do with basketball. But because he had the shoe deal, because he had other deals off the court, there was an opportunity. So athletes as a whole are just getting a lot smarter. Definitely doing more than we were maybe years ago.

What kinds of investments are you currently involved in?

My wife and I have stocks. We have some bonds. We have our retirement set aside, and we have some defined benefit plans. Then we have our nest egg of savings. I was just involved with SweetGreen. Jeff Fried also helped me facilitate that. He’s also helping with something with FanPix. I think it’s going to transcend the fan experience in sports. It’s basically the ability to capture the biggest moments at the arena or ball park. And once fans leave they can go and get that picture and keep that moment. Those are things I’m slowly getting into. The main thing right now is to get the capital and save it. I think sometimes us athletes get involved in too much sometimes. It’s different if you’re getting $20 million in guaranteed money. But there are no guaranteed contracts in boxing; we get paid fight to fight. I’m sensitive to that which is why I’m saving as much as I can. When my career as a fighter as a over, then it’ll be time to put my business hat on and get into some things, maybe start my own promotions company.

So generating revenue is your main focus.

That’s my main focus. That and making sure I pay the IRS and pay them on time. [Laughs.] I don’t want those kinds of problems. As a businessman, I just want to make the right decisions and make them at the right time. These are my biggest earning years, and when it comes to investing capital I’ll err on the side of caution.

What kind of philosophy do you have when it comes to what type of businessman you’re going to be?

I don’t know just yet. James Prince is my manager. He’s a very wealthy man, very shrewd, very sharp. I think one thing that I want to do is start my own promotional company. For years, I said I didn’t want to get involved but I can be the first client. I have the name S.O.G. Promotions, which is getting visibility right now. I made sure that was in my contract. I’m not licensed yet, but when that time comes people will know what S.O.G. Promotions is. That way, I own my image and I own my likeness and rights to my contract. I paid my dues — I’ve never tripped on merchandise being sold at my fights and where the money went. But now it bothers me. It’s my face, it’s my name on the merchandise but I’m not getting a cut because I had to sign an exclusive deal. At the right time this is something that I want to do.

If I can sign the right fighters — and I’ll probably be very, very selective — I would be open to signing to helping them in whatever way I could. If I can’t help them I don’t want to be involved because I don’t want to hurt anybody’s career. That’s another avenue. But just again, being sensitive. I don’t have a list of things I want to get into but I am learning a lot right now. I’m looking at people who are successful but I’m also looking at people who made mistakes. When my times comes, I’ll be ready. This is a learning season for me.

I’ve followed your career now for a while and I’ve never had confirmation one way or the other on what S.O.G. means, but I think I know what it means. Is going into the ministry something that’s in your future?

I think that’s the ultimate endgame for me. It’s been spoken to me before. My pastor is Napoleon Kaufman, the ex-Raider and I go to The Well Christian Community Church in Livermore, California. He’s been in a similar position. Before we started going to his church it was something that I feel like the Lord was leading me to do. I have a passion for it but it’s not something you jump into. Just like on the business side, I just have to keep getting in my word, spend time with the Lord and just allow God to keep developing me. I don’t know if that means I’ll be in a pastoral situation or as a minister of the gospel, believe that’s something that is the endgame for me. It’s probably my real calling.

But you’re a natural born fighter: How do you strike a balance between your sensibilities as a fighter — a profession in which time is limited and you’ve got to go for yours as quickly as you can — with your patience that you have as an aspiring businessman and even what you want to do from a spiritual standpoint?

Just learning, man. I know that the ministry is nothing to play with. I’ve seen success and I’ve seen failure. My minister told me — and I love him for this — he basically told me that he’s not going to let anybody prostitute me because of my name. He said they tried to do it to him. So I just have the right people around me. I also learn a lot by watching. You’re right. In this sport, you really do have to be aggressive. But I know what arena I’m in. And look — I do a lot of praying, man. I pray for help. And wisdom. Sometimes that wisdom comes in the form of a man. Sometimes I figure things out on my own. That’s why when I talk about my faith it’s not to throw it in anybody’s face or be obnoxious. This is my lifeline. It’s what allows me to survive and thrive to do what I’m doing. I haven’t mastered it, but it’s a constant battle. You’ve got to fight for balance.