Spelman Grad's Agency Is Minority Business of the Year 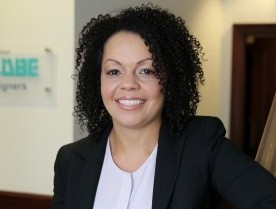 [Related: The Pros and Cons of Owning a Franchise]

This week, Blount McCormick also learned that she is a finalist for the Visionary Award, an honor given out by the Columbus, Ohio, chapter of the National Association of Women Business Owners. Each year, the NAWBO Columbus Visionary Awards honor one central Ohio woman business owner who has achieved success with her business while also making notable contributions to the community, her industry, and to other women business owners.

“I am so excited that we have been named the Minority Small Business of the Year,â€ Blount McCormick said in a released statement. “I am committed to working with and mentoring other women-owned and minority-owned businesses whenever I can. I also believe strongly in building diversity in my own company. We live in a global society, and I believe that our companies, therefore, should represent the society in which we live.â€

She graduated from Spelman College with honor is 2000. Upon graduation, she started her career in retail. After extensive experience as a corporate traveler, she embarked on owning a travel franchise business.

In honor of National Small Business Week, which is May 1—7, the SBA will honor Blount McCormick and the other winners at an awards ceremony on May 5 at Pinnacle Golf Club in Grove City.

“The SBA’s Columbus district office is honored to highlight the impact of the innovative men and women who work every day to drive our nation’s economic growth, and create jobs and opportunities for Ohioans throughout many communities across the state,â€ noted Martin Golden, district director of the Columbus District Office of the SBA.

According to the SBA, a panel of judges reviewed the nominations and chose winners using an in-depth selection process. The panel judges the nominees’ demonstrated success through increased sales, business methods, and employment growth.

UNIGLOBE Travel Designers was founded in Columbus in 1981 and became one of the first franchises in the United States for UNIGLOBE Travel International, a company based in Canada. In its 34 years, the company has grown from a small business, with two agents, to a thriving company with 30 employees.

How to Make Your Financial Goals a Reality

No Same-Day for You: Amazon and Other Examples of Unequal Access in Tech