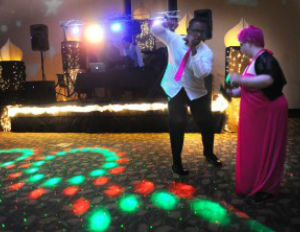 After getting turned down by her mother and another student to be her date to prom, four-foot special needs student Breyonna Nelson mustarded the courage to ask her six-foot-three-inch football friend, Cecil Bratton, to court her to every girl’s dream dance.

While the two seem to come from very different ends of the spectrum when it comes to high school, the people that know them say they are actually alike in so many ways. “They’re at different ends of the spectrum, but still so much alike. Bree is kind to everyone, helps anybody, and Cecil is the same way,â€ says Diane Slawson, Breyonna’s personal helper at the school.

Cecil and Breyonna first met last year when the Central High School football star and his football and cheerleader friends posted a YouTube video to help elect Breyonna for Military Ball Queen, reports Montana’s St. Joseph News-Press. When the girl known for her pink hair asked Bratton to the prom, he quickly responded, “I said I’d be honored. I said it right away.â€ He continued to tell the St. Joseph News-Press, “If I wasn’t taking Bree to the prom, I’d probably be just kicking it with my friends.â€

As it may seem odd in the eyes of others, it was a no brainer for Breyonna to ask Cecil to be her date to her high school prom. “We’ve been friends because I like football. He’s a real responsible kid, too.â€

Suspicious Substance Found in Letter to the President