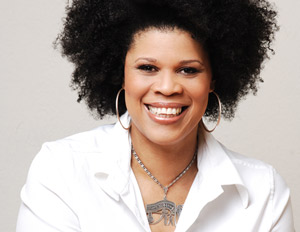 For over a decade Tracy “Twinkieâ€ Byrd has helped launch the acting careers of countless Hollywood hopefuls, making her the first casting director to successfully shift from music videos to major motion pictures. The New York native has an eagle eye for raw talent that has allowed her to discover actors such as Michael Kenneth Williams [Boardwalk Empire], Naturi Naughton [Notorious, The Playboy Club], Columbus Short [Scandal, Stomp the Yard] and Laz Alonso [Jumping the Broom, Avatar], to name a few. Most recently Byrd has been credited with casting the late Whitney Houston‘s final film, Sparkle, which also introduces American Idol star, Jordin Sparks, in her acting debut.

With an infectious personality and ambition that is matched by her foresight, the veteran casting director sat down with BlackEnterprise.com to talk about the slick moves that boosted her early career, how she chooses leads, and just how closely art and life can intermingle.

How did you get started out in casting?

I didn’t always want to be a casting director. I had this great personality and I typed 95 words a minute so I had no problem getting a job…but keeping a job was a problem; I talked on the phone all the time [laughs]. My brother [Jeffrey Byrd] worked for Spike Lee–he introduced me to people in the industry and I started interning and working at Classic Concepts. He went on to become a very talented director now and allowed me to cast his first feature film, Kings Ransom, starring Anthony Anderson and Jay Mohr. My brother is the one that really kicked the door open for me and allowed me to come in on his coattail; he’s very proud of me.

But, of course, I put in my own hard work, too. Audacity and tenacity are two of my favorite words: When I first started out I got a meeting with [The Cosby Show casting director] Julie Hughes; she said, “You have 15 minutes.â€ So I asked her, “Who gets your coffee and empties the trash?â€ There wasn’t anyone doing that and so I made that my job as an intern.

You have to be! You can find out so much about what’s going on from what ends up in the trash. Read everything in the trash [laughs]. You can learn a lot as an apprentice if you really want to. I remember [casting director] Tracey Moore put an ad in the paper when I was first starting out; she was looking for actors. I showed my dad and said, “I really want to work as her assistant but this ad is for a casting call.â€ So my dad had the idea to call her and tell her I’d be willing to assist her on the day of the casting for free. I called and she said that no one had offered to come in to help her so the job was mine–I interned for her that full day.

When I was working for Elaine Williams [of Essence magazine]; every time I had to RSVP for her to go to an event I’d add my name to the list, too [laughs].

You didn’t get caught?

How would I? I’m calling from Essence; no one asked questions [laughs]. I found my way to wherever I needed to be.

Even with your personality and business savvy, were there times you thought that you wouldn’t make it in the industry?

Yes, maybe. There are a lot of stepping-stones and sometimes you don’t know when you’re making lateral moves. We can’t make vertical moves all the time. When I moved from New York to L.A. I started to second-guess myself. People had more experience and had worked with big-time names. I just had to learn what to take and what to leave behind. I quickly moved up because of my business prowess, and my whole family rallied around me, prayed for me, called me from all the way in North Carolina; all of those little things helped me tremendously. Adversity is a blessing; it makes you push harder. And if you have family like mine giving up isn’t an option.

George Zimmerman Has Been Arrested and Charged. Now What?