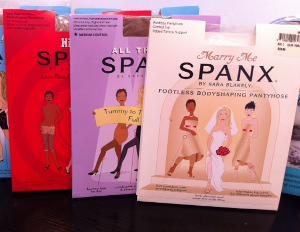 Spanx Inc., the popular Atlanta shapewear company, has been slapped with a claim that its products are infringing on the designs of a New York clothing company.

The company, Yummie Tummie, also makes body contouring shapewear and claims that several of Spanx’s best selling products violate their patents. They have demanded that Spanx cease and desist in the production of the products in question including Spanx’s “Total Taming Tank,â€ “Top This Tankâ€ and “Top This Cami,” according to a claim filed March 5th in federal court in Atlanta.

Spanx makes more than 200 products including bras, pantyhose and swimwear, which all have slimming effects on the wearer. It sells products in over 50 countries. Sara Blakely wrote the first Spanx patent herself 13 years ago, unable to shell out $3,000 for a lawyer. According to published reports, Spanx is now valued at $1 billion dollars.

Yummie Tummie was founded by Heather Thomson, a cast member of “Real Housewives of New York City.â€ A spokesperson for Yummie Tummie said Thomson is unavailable as she’s in Florida.

Spanx issued a statement saying, “Spanx was making shaping camisoles long before Yummie Tummie. We have no further comment. The papers filed in court provide our position at this time.â€