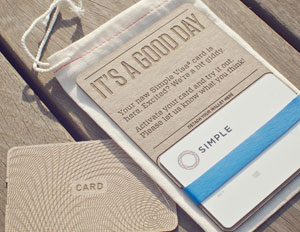 BBVA, the Spanish banking group, has purchased the Portland-based mobile banking startup Simple for $117 million. The news is good for both Simple, which will have access to BBVA’s $820 billion in assets, and the banking group, which is looking to stay ahead of its competition in the digital banking arena.

In a press release, BBVA calls the acquisition an example of its commitment to innovation in the financial services industry.

On Simple’s blog detailing the news, customers shouldn’t expect anything to change based on the acquisition, including its leadership by CEO Joshua Reich and CFO Shamir Karkal, both co-founders of Simple. “Joining with BBVA gives Simple the resources and global footprint we need to see our vision writ large,â€ said Reich. “BBVA believes in our vision and the course we have set to transform the industry.”

Simple was founded in 2009, but launched in 2012. Simple users received a Visa debit card and an app for iOS and Android. The digital banking service provided access to over 55,000 ATMs, photo check deposits, and the ability to disable your card from your smartphone. Simple was previously partnered with The Bancorp Bank, the fifth largest bank in the US.

Simple is competing with a growing number of online-only banking companies like Moven or GoBank, a subsidiary of Green Dot Bank, that are eschewing buildings and bank tellers for ATM networks that provide free services, and check depositing via smartphone.