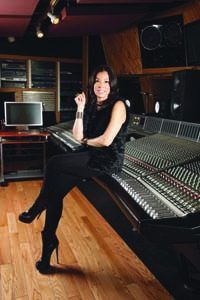 Philanthropy: Araica launched the Red Bottoms Foundation to support the growth of women in the music industry through internships and scholarships. She also awards annual scholarships to female students at her alma mater. “I try to do as many panels and speaking forums as I can, and let them know that they shouldn’t be discouraged by people who say women don’t do this or do that. Don’t be discouraged by what is ‘normal.’ It’s really important to think out of the box, that is what I attribute my success to. I see myself as a trendsetter. When I’m in the studio mixing I try to find that next thing. I ask myself what hasn’t been done or what can I do to really bring this song a unique sound that people are going to be talking about–like I left a footprint, my trademark. It’s not just a job, it’s a legacy. I see myself as a pioneer in what I do, being one of the very few women out there doing it.â€

Favorite Part of the Job: “The engineer is a big asset in the equation of creating a record. People just think it’s the producer and an artist, and then a record comes out. But the mixing process is the final stamp on the song through sounds. You can spend anywhere between 6 to 8 or 15 to 24 hours, or maybe two days or more, on a song just making sure that everything is in its right place, from levels to the effects that you want to put on vocals, to the type of kick that you’re using and EQing. It’s very intricate, but that’s my favorite part of the job because to me, it’s like painting a picture. You’re really painting the whole story behind [a song] through sound.â€