Something Else That Sets Cam Newton Apart 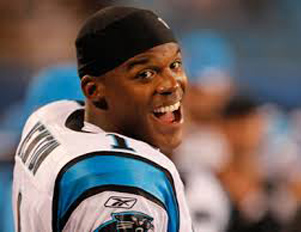 This is Cam Newton’s year. The 26-year-old Carolina Panthers quarterback is capping off a nearly perfect (15-1) season by winning the league MVP and leading his team to this Sunday’s Super Bowl 50. But, according to Bloomberg News, its not just his electric personality and charismatic smile that are making him one of the most popular and profitable figures in the NFL.

Football’s current “Itâ€ man, like several others that have come before him, already has an impressive $11 million endorsement portfolio that includes companies and brands like Beats by Dre, Under Armour, Gatorade, Microsoft Corp. and General Motors Co. It’s his appeal to 13- to 17-year olds–a demographic too young to have their own credit cards–that makes him unique.

Newton’s popularity can be measured by merchandise geared toward younger fans flying off the racks and filling e-shopping carts. Companies like Fanatics.com have reported youth-sized shirts and jerseys with Cam’s name being top sellers for the last three months, contributing to the company’s sales being up five-fold from last year. Kids also want to eat what their favorite player is eating, something that Dannon Foods Inc. recognized early and decided to capitalize on when it made Newton the face of its Oikos brand.

[RELATED: 5 Lessons From Cam Newton on Dabbin’ Your Way to the Top]

But one of Newton’s greatest touchdowns will be scored after the Super Bowl when he’ll begin filming a 20-episode series with Nickelodeon titled I Wanna Be. “The show is going to give Cam the chance to go head first into the kid’s market,â€ explains Newton’s agent Carlos Fleming of WME/IMG, who is also working to attach Newton’s name to digital deals and data-driven businesses, like fitness trackers, which skew younger.

Newton has many critics of his popularity and style–his theatrical, on-field behavior has been characterized as “egotism, arrogance, and poor sportsmanship,â€–but, ironically, he couldn’t be more popular and influential right now with the children of those critics.

Super Bowl: If You Have Money in Stocks, Root For Cam Newton & Carolina!