'Soda Shaq' Low Caloric Drink Coming to a Store Near You 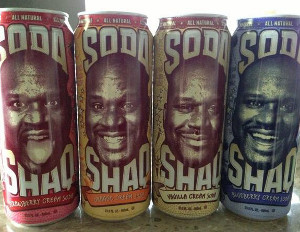 TNT analyst and former NBA player Shaquille O’Neal has agreed to a deal with Arizona Beverage that will put 50 million Shaq Soda cans in circulation in June.

The Shaq cream soda flavors are strawberry, orange, vanilla and blueberry and have 90 calories each.

BevNet says Soda Shaq has a suggeted retail price of $.99 price “and come emblazoned with one of eight photos of the big man’s unique facial expressions.”

The soda, which is labeled as “All Natural,” will be available this June.

Earlier this year, O’Neal announcedÂ a partnership with Devotion Vodka to produceÂ  his vodka “Luv Shaq.â€ The bottles, which feature his likeness wearing wings mid flight, will be available next year.

O’Neal has made big entrepreneurial moves off the court since retiring. He was a pre-IPO investor in Google, owns several fitness centers, and multiple Five Guys burger franchises.Â  Shaq also reportedly owns equity stakes in Vitamin Water and Muscle Milk.

George Clinton to Star in His Own Reality Show

Back to Basics: Your Guide to Creating a Top Secret Facebook Group