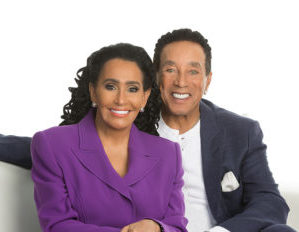 Smokey Robinson and his wife and partner, Frances Smokey Robinson is one of America’s most prolific songwriters of all time. With a career spanning five decades in music and entertainment and a catalog of more than 4,000 songs, Robinson is one of the most iconic figures in popular music.

Along with his wife and business partner, Frances, an accomplished interior designer, Robinson recently presented their latest venture; skin care solutions for people of color. The product line was originally developed for the Robinsons, due to the lack of skin care products available for their particular skin types.

Skinphonic Research Shows a Void in the Cosmetics Industry

According to data provided by Skinphonic, the cosmetics industry creates and tests products primarily for single issues–such as wrinkles, age spots, and dry skin–but most are actually only tested on lighter skin. However, there are biological differences between Caucasian skin and pigmented skin. Pigmented skin has different sized cellular structures, and reacts differently to certain ingredients. Biologically, people with pigmented skin represent more than 80% of the world population, which includes people living in Latin America, Europe, Asia, Africa, and the Middle East.

The Evolution of the Robinsons’ Product Line

One day, a friend of the Robinsons offered to introduce the couple to a development team of dermatologists and scientists that were interested in working with them to formulate a line of products designed specifically for their skin types.

“I have dry skin, due to my extensive travel schedule. I also play a lot of golf,â€ Robinson says. “Frances and I were looking for a solution. We tried just about everything that was on the market,” he continues.

For more than two years, the development team worked with the Robinsons to formulate three products. After conducting extensive clinical trials, the products not only worked well for the Robinsons, but the couple became interested in making these products available to the general market.

Named after two of Robinson’s signature songs, which he penned for The Temptations, the skin care system for men is called Get Ready (Cause Here I Come), and the line for women is aptly named My Girl. The products were created by Skinphonic, a leading skin care company that focuses on providing services and solutions to those underrepresented in the beauty and cosmetic businesses. “The Get Ready and My Girl skin care lines are designed for people of color–not just black people. The products are made for people with pigmentation in their skin and were developed for that sole purpose,” Robinson says. “The three-step program is simple and works perfectly, especially for guys,â€ Robinson says.

Both the Get Ready and My Girl skin solution programs feature three items: a morning moisturizer called A.M. Hydration; the P.M. Treatment Complex for the evening; and the Twice Daily Cleanser.

Robinson says that Skinphonic is also currently formulating additional products for their line, as well.

Healthy Living Has “Really Got a Hold on” the Robinsons

At 77-years-old, Smokey Robinson, along with his wife Frances, are health conscious and longtime advocates for wellness. Other than the occasional glass of wine, Smokey does not drink, nor does he smoke. He also hasn’t eaten meat in more than 40 years; first, he was a vegetarian, occasionally treading the pescetarian line with the incorporation of fish and fowl into his diet. However, for the past two years, Smokey has gone totally vegan.Â In addition to eating well, the iconic singer and songwriter exercises regularly. He’s an avid golfer and has practiced yoga for more than 35 years.

“I believe in taking care of myself,â€ Robinson says. “I want to keep my body healthy for as long as possible.” When asked to confirm whether he wrote, co-wrote, and collaborated on more than 4,000 songs, Robinson replied, “Yes, ASCAP (American Society of Composers, Authors, and Publishers) sent me a song log a few years back, but since then, I’ve written many more. I write all the time.â€

Proclaimed by Bob Dylan as “America’s greatest living poet,â€ and revered globally as the man who helped Motown Founder Berry Gordy build an American institution, Robinson is peerless, and his many significant contributions to popular culture are unparalleled. Known around the world for his numerous hit records with The Miracles and as a solo artist, Robinson was one of the leading architects of the Motown sound. He also wrote a number of chart-topping tunes for other iconic musicians, including the infamous tracks “My Girlâ€ and “Get Ready,” Â originally performed by The Temptations.

In the era of brand extensions, who would have ever imagined that two of Robinson’s songs, “My Girl,â€ and “Get Ready,â€ released respectively in 1965 and 1966, would be used for a skin care line?

Forward: The Doctor’s Office of the Future [VIDEO]