Growth in Smartphone Ownership Led by Young Adults and Teens 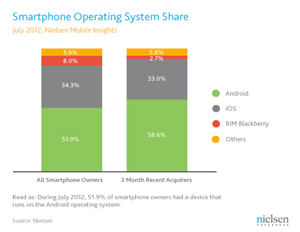 Smartphone ownership is increasing across the board; however, teens and young adults are dominating this sector of consumer electronics sales, according to a recent study.

“Among most age groups smartphones represent the majority of U.S. mobile subscribers, but American teens were the age group adopting smartphones the fastest,â€ said Nielsen analyst Nichole Henderson. “As teens increase in their share of smartphone owners, mobile carriers and manufacturers should consider how to market to this growing group.â€

Android handsets continue to lead the smartphone market, followed by the iPhone.