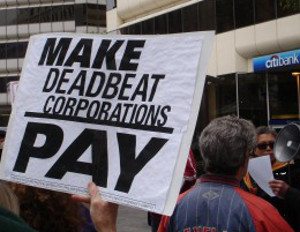 Currently, the U.S. corporate tax rate is 35%, and many businesses pay that rate. But because of loopholes, many U.S.-based multinational companies pay far less. Usually Republicans have been in favor of tax loopholes, in the belief that the money will trickle down into the market. However, a new poll of small business owners shows strong bipartisan opposition to these tax breaks.

Small business owners strongly support closing overseas corporate tax loopholes and strongly oppose the idea of a territorial tax system. Small business owners want to end deferral, so that US multinational corporations will pay taxes on foreign earnings after being given credit for foreign taxes paid. They also favor replacing the current system of basing taxes on where profit is reported to a system which apportions taxes according to where sales are made, where employees work and where physical assets are located.

Key findings in the study include:

These poll results represent findings from a scientific national phone survey of 515 owners of small businesses (with 2 to 99 employees. The nationwide live phone survey was conducted betweenÂ March 14-25, 2013

Changing the Game and Making History: How Supplier Diversity Is Walmart’s MVP