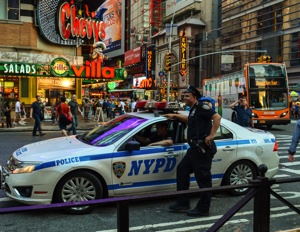 According to the NYC Crime Map, the sketchiest place in New York is its heart. (Image credit: Amiga-Commodore)

There’s a man eating food out of a garbage can in New York’s Upper West Side, and you should be absolutely terrified.

There’s also a piece of dog poop on the floor in Chinatown that should have you heading for the hills, just as quickly as a man following a woman home should strike fear in your heart.

At least, that’s what I gather from searching through SketchFactor, an app that uses crowdsourcing to determine what “sketchiness” is happening in your area. It was created by two white professionals, and is a finalist, competing for $20,000, in New York’s BigApps competition.

It also makes discrimination as easy as breathing.

SketchFactor works by aggregating insights left in areas something “sketchy” happens. But what does that mean? According to SketchFactor, that includes anything from a man with no pants to someone following you home. Sketchiness covers the gamut, but its subjective nature makes it useless at best and discriminatory at worst.

As Valleywag’s Sam Biddle put it, calling something sketchy is a tactic “young white people use to describe places where they don’t feel safe because they watched all five seasons of ‘The Wire.'”

Co-founders Allison McGuire and Dan Herrington are adamant about SketchFactor being a tool to fight against discrimination rather than promote it. In a blog post from December, the team declared that SketchFactor was about reporting incidents and not feelings, and their zero tolerance policy on discriminatory posts. “Who we’re not: racists, bigots, sexists. Any discriminatory posts will be deleted.”

Allison McGuire lives in New York’s West Village, which has a higher crime rate per resident than any area in the Bronx or Brooklyn.

But since SketchFactor’s data is based on subjective posts, how accurate is it? How sketchy are these areas in reality?

You want a safe neighborhood? May I suggest Harlem, which, according to New York’s Crime Map, has fewer crimes per resident and fewer crimes in general than Midtown Manhattan, the West Village, East Village, Williamsburg, and Lower Manhattan.

“We understand that people will see this issue,” McGuire said to Crain’s New York Business. “And even though Dan and I are admittedly both young, white people, the app is not built for us as young, white people. As far as we’re concerned, racial profiling is ‘sketchy’ and we are trying to empower users to report incidents of racism against them and define their own experience of the streets.”

(And, as if to cover all the bases, national organization Million Hoodies Movement For Justice is listed as a partner on the bottom of their Website.)

These explanations still leave the question of what exactly this app is for. What’s the purpose or practicality of it?

Is it for tourists visiting New York?

A lady walking somewhere late at night in an area in which she’s unfamiliar?

Common sense and hard data should dictate when and where you should walk, not an app based on subjective comments left about a homeless man begging for change. What SketchFactor is essentially crowdsourcing is not information on areas, but fear of the unknown.

That irrational fear of everyone who is behaving “sketchy” helps no one, but hurts everyone. The reality is, no native New Yorker will use this app, “sketchy” things happen all the time in the city, including the people responsible for SketchFactor. McGuire herself said, “I live in New York now… so almost nothing’s sketchy to me anymore.”

McGuire adds that she launched SketchFactor “because I was sick of getting caught in seemingly sketchy places and not knowing where to go.”

The app is more like a poor replacement for common sense rather than a tool that encourages attentiveness in an unfamiliar area.

If SketchFactor was truly about making you feel safe, it would include actual tools to facilitate that. It would aggregate recent crime data for your area, or let you know when you’re entering an area that’s noted for criminal activity or occurrences of harassment. If one person reports a surly homeless man on “the corner” chances are he probably won’t be there the next day. After all, he’s a person, not a potted fern.

You want to feel safe? Then why not arm yourself with some actual protection and knowledge? If you’re worried about an area, check out New York’s NYC Crime Map, which details where and when crimes happened in whatever borough you’re investigating, from your computer or smartphone. Find out what (legal) tools you can carry for self defense and protection from attackers.

But if what constitutes “sketchy” for you is someone walking around New York with no pants, then I kindly suggest moving to New Jersey.

Patrick Austin is a New York-based techie and lead tech editor for BlackEnterprise.com as well as Black Enterprise magazine.