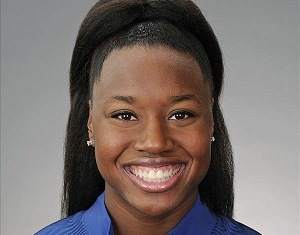 Simone Manuel became the first African American female swimmer to win an individual Olympic gold medal in swimming for the U.S. when she tied for first place in the 100m freestyle. The 20-year-old Olympian now holds the Olympic record at 52.70 in the 100-meter freestyle. Team USA hasn’t seen a gold medal in women’s 100m freestyle since 1984, according to news reports. Manuel also won a silver medal at the Rio Olympic Games in the Women’s 4x100m freestyle relay.

“All I can say is all glory to God,â€ Manuel told NBC in an interview following her race. “It’s definitely been a long journey these past four years, and I’m just so blessed to have the gold medal. I’m just so blessed to have a gold medal.â€ When asked about the significance of being the first African American woman to win gold in this event, Manuel said, “This medal is not just for me. It’s for a whole bunch of people who came before me and have been an inspiration to me. … It’s for all the people after me who believe they can’t do it and I just want to be an inspiration to others that you can do it.â€

According to her USA Swimming Foundation National Team bio, Manuel is originally from Sugar Land, Texas, where she swam at her local club. She currently is on the women’s swimming team at Stanford University. At Stanford, she is a two-time individual NCAA champion: winning the 50- and 100-yard freestyle in 2015. In 2015, Manuel became one of the first three African Americans to place in the top three spots at the 100-yard freestyle in any Women’s Division I NCAA Swimming Championship.

She took swimming seriously after watching Michael Phelps win his historic eight gold medals in the 2008 Beijing Olympics. “I definitely [remember watching] Michael Phelps and just all the amazing things he’s done for the sport of swimming,â€ she told Us Weekly. “I was really, really impressed. I was like, ‘I want to do that one day!’ Maybe not the eight gold medals, but go to the Olympics!â€

Like Jones, Manuel gives hope and encouragement to more African American youth to take up the sport of swimming. Jones is currently educating others about the benefits of going in the water as one of the ambassadors for the USA Swimming Foundation’s ‘Make A Splash’ cross-country tour. Manuel is certainly likely to follow in his footsteps.

10 Questions to NEVER Ask in an Interview