SCOTUS Abortion Ruling: What You Need to Know - Black Enterprise 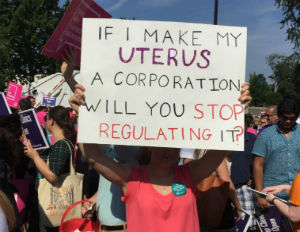 In 2011, the Republican-led Texas state legislature introduced HB 2, which essentially controlled when, where, and how a woman could undergo an abortion procedure.

According to the anti-abortion lawmakers who advocated for these now unconstitutional restrictions, the HB 2 was meant to “protect” the health of women seeking an abortion. In addition to a forced 24-hour “waiting period,â€ HB 2 required abortion clinics to undergo unnecessary costly structural upgrades or face closure. Before the court’s ruling, this would have forced 10 of the 19 clinics (only 19 in the entire state of Texas!) to shut down.

In a 5-3 ruling, the court deemed HB 2 unconstitutional. Writing for the majority opinion, Justice Stephen Breyer noted that “there was no significant health-related problem that the new law helped to cure.â€

But it was Justice Ruth Bader Ginsburg–also known as the Notorious RBG, depending on who you ask–who came through with the most devastating takedown of the GOP-inflicted HB 2.

“Given those realities, it is beyond rational belief that H.B. 2 could genuinely protect the health of women, and certain that the law ‘would simply make it more difficult for them to obtain abortions,’ Ginsburg wrote. “When a State severely limits access to safe and legal procedures, women in desperate circumstances may resort to unlicensed rogue practitioners at great risk to their health and safety.â€

Ginsburg closed out her concurring opinion with the judicial equivalent of an “I wish you would…â€ warning that any future laws like HB 2 would NOT be tolerated.

“So long as this Court adheres to Roe v. Wade and Planned Parenthood of Southeastern Pa. v. Casey, Targeted Regulation of Abortion Providers laws like H.B. 2 that ‘do little or nothing for health, but rather strew impediments to abortion,’ cannot survive judicial inspection.â€

Justice Clarence Thomas dissented, but what else is new.

Democratic presidential nominee, Hillary Clinton released a statement praising the ruling as a “victory for women across America.â€

“Donald Trump has said women should be punished for having abortions,â€ Clinton said. “He also pledged to defund Planned Parenthood and appoint Supreme Court justices who would overturn Roe v. Wade.”

While President Obama also had warm words for the ruling, Speaker of the House Paul Ryan (R-Wis.) condemned the ruling, vowing to continue the fight to “protect women’s health.â€

A Victory for Black Women

The reproductive rights groupÂ In Our Own Voice: National Black Women’s Reproductive Justice Agenda, celebrated the ruling, while highlighting the vital role it will play in ensuring the health and well-being of black women.

“Black women, young women, immigrant women and low-income women in Texas stand to benefit the most from this decision.Â  The 725,000 black women of reproductive age in Texas, plus the 12.5 million black women in the other 20+ states with similar sham laws, will potentially be saved from higher costs, longer delays, and extra steps when seeking an abortion thanks to the SCOTUS action.”

“When it comes to abortion, we trust black women, all women, to make the important personal decisions that are best for themselves and their families,â€ said Marcela Howell, founder and executive director of the organization. “This is the first step in ensuring that politicians stop playing politics with women’s lives.â€