â€˜Scandalâ€™: How Social TV and Engagement Can Drive Audience Viewership 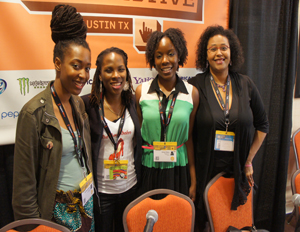 Kerry Washington and the dynamic cast of ABC’s Scandal have taken over Thursday nights on ABC and practically every social media platform. The Twitter hashtags #Scandal and #AskScandal consistently top the trending topics list and causes even more viewers each week to tune into the political drama. How popular is this show, might you ask? Well, its Feb. 7, 2013 show generated over 350,000 tweets and caused the television network to refer to Scandal is the “most tweeted-about show on Thursday nights.â€

Allison Peters, social media manager and digital strategist, joined writer and social media strategist Lovette Ajayi, video blogger Franchesca Ramsey and moderator and digital strategist Kimberly C. Ellis, Ph.D, better known as Dr. Goddess, in Austin, Texas for South by Southwest (SXSW) 2013 to discuss why Scandal is the hottest show on television and in the social space at the “#SCANDAL: How Television’s Hottest Show Is Fueled by Social Media” panel on Sunday.

Having worked with Washington prior to Scandal’s television debut, Peters’ social media expertise paired with the actress’ willingness to try her hand at tweeting was a match made in prime-time heaven. Widely-known as —kw’s krew, the savvy social media enthusiast fulfilled Washington’s wish to get Scandal on the list of most social shows on television. Despite her initial reluctance to get on Twitter, she has not only excelled at using the social platform–letting fans know about her activities outside of acting, arts education advocacy and work with VDay, among other things–but encouraged creator Shonda Rhimes to encourage the cast to get on Twitter and engage with fans about the show.

Scandal has grown such a cult following that tons of bloggers, artists, and creatives are using their voices to broadcast how they feel about the drama —filled show. Ajayi, who blogs at AwesomelyLuvvie.com, got involved with Scandal by doing episode recaps and live tweeting during the show. “Every character on Scandal is ratchet and I love it,â€ said Ajayi, one of BlackEnterprise.com’s 2012 Black Blogger Month honorees. She laces her tweets and commentary with tons of humor, which Scandal fans have grown to love. Here is a sample:

@Luvvie: If you don’t watch #Scandal, I ask you why you even own a TV right now? WHAT IS THE POINT?

Ajayi’s followers wait frantically for her to publish her latest show recaps so that they can laugh along and join in on the fun. “Using Twitter is like watching TV with millions of people at the same time.â€

Ramsey, creator of S*hit White Girls Say, loves using her voice and critical eye when she recaps Scandal. “Recapping the show involves being honest, whether it be bad or good.â€ Â Her approach to engaging with the show allows fans to really see difference of opinion. “The experience of watching Scandal makes you feel like you are part of a giant conversation – it’s become a communal experience – where friendships are even developed.â€

With Washington leading the way, and with the help of Peters, the show has seen a huge spike in viewership. Since the show debuted, engaging in social media, Scandal has added over 10 million new viewers to its viewership. With all of this activity, TV casting agents have even started looking at the follower count and engagement actors have within social.

This real-time case study should prove useful in identifying how a multicultural audience can drive meaningful conversations and viewership across the board. Â Thus, creating a space where the African-American voice is counted towards metrics of engagement when it comes to our presence in today’s social TV trends.–Mike Street and Mary Pryor