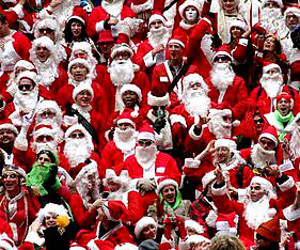 This weekend, cities across the globe were inundated with hundreds of costume wearing folks walking the streets as SantaCon came to town.

The event, which started on the West Coast, has been running for nearly 3 decades. It’s best described as part costume party, part barcrawl, and part fundraiser. Unlikely destinations such as Vietnam, Dubai and China took part in Santacon this year. Many small businesses look forward to the boost they get from the annual celebration.

The Peekskill Business Improvement District (BID) in New York found it imperative to bring SantaCon back to their area for a second year.

Last year, bartenders in the area said they “underestimatedâ€ how many people would come out – and this year – hired extra workers to deal with the large number of customers the event draws.

Usually a down part of the year, many stores saw a boost in customers purchasing Christmas related costumes and Santa merchandise. Even bars and restaurants that were not officially on the list of venues participating in the event witnessed increased traffic as the overflow of patrons came in after other bars reached capacity.

Participants this year were asked to donate at least two non-perishable food items, to help victims of Hurricane Sandy. Last year, the New York City event raised $10,000 for the Toys for Tots program, a fact the official SantaCon website pointed out with the slogan “Your drinking helps kids.â€

Not everyone embraced the Santa dressed masses though. Eater.com editor Greg Morabito created 3 signs owners could print out and post on the doors to their businesses which read “We reserve the right to refuse service to drunk Santasâ€ and ” No Santas, go back to the North Pole.â€

Will the Next Generation iPad Mini Have Better Screen Resolution?