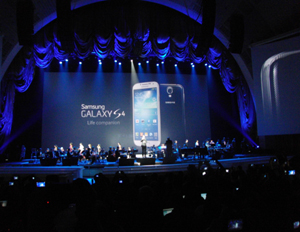 Samsung took another step up the mobile tech ladder Thursday with the launch of the Samsung Galaxy S 4 smartphone, the new flagship of its Galaxy Android line. At a glitzy debut at Radio City Music Hall in New York’s Rockefeller Center, Samsung showed off a unit with two impressive cameras and so many sensors that some of the phone’s features can be accessed without touching the screen.

For example, Samsung’s Smart Pause feature detects when your face is aimed at a video. Look away and the video stops–look at the screen again and the video starts running again. The Smart Scroll feature lets you scroll through email messages and other screens by waving a hand up or down near the screen–your fingers don’t need to make contact. A Drama Shot feature can run off dozens of images in a second and show them in one image as a collage–thus allowing you to quickly select the best shot.

“These ideas have been conceived from our observations of real life,â€ said J.K. Shin, president of Samsung Mobile, at the Radio City Music Hall event.

The Samsung Galaxy S 4 has a 13-megapixel camera on the rear and a two-megapixel front-facing camera, but the interesting feature is that they can be used at the same time. For example, you can have a live video chat with someone using the front camera and let the person on the other end see what you’re looking at with the rear camera. The person at the other end sees your face in a small window and what you’re looking at in the rest of the screen.

The Galaxy S 4 is awash in wireless connectivity. Not only does it support Bluetooth 4.0 and various flavors of Wi-Fi (a, b, g, n and ac), it also incorporates a throwback technology: Infrared. This means you can use the unit with apps like Peel to control your TV and other audio and video equipment. The infrared sensor is also used to detect your hand gestures for the Smart Scroll feature.

In addition to a digital compass, an accelerometer, RGB light and proximity sensors, the Samsung Galaxy S 4 has a gyroscope and a barometer as well as temperature and humidity sensors. Some of these sensors come into play for health-related apps that can track calorie burn and intake and walking or running distances. The unit supports 3G HSPA and 4G LTE, comes with 2GB of built in RAM and has a microSD slot for removable storage cards with capacities of up to 64GB.

With so many sensors and radios, the Galaxy S 4, which runs Android 4.2.2 (Jelly Bean), stresses its batteries more than most smartphones. Fortunately it comes with a removable 2,600 mAh battery–significantly more potent than the 2,100 mAh battery in the Galaxy S 3.

The Samsung Galaxy S 4 will be available in April at prices yet to be set by the various carriers.

Omarosa Defends Return to The Apprentice

Cicely Tyson Still Gets Nervous After all These Years?