Sachia Vickery, Playing it Safe With Her Money, Playing to Win on the Tennis Court 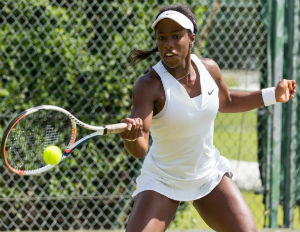 In 2013, Paula Liverpool, single mother of Sachia Vickery, put together all of the money she had at her disposal so that Sachia could go to the United States Tennis Association National Junior Championships in San Diego. Liverpool and Vickery, who live in Miramar, Florida, were going to stay with a friend instead of a hotel, in order to save on accommodations. After a few days, however, the friend had to make room for unexpected relatives, leaving Vickery and Liverpool without anywhere to stay, and without the budget for a hotel.

“I told Kathy Rinaldi, (the national coach for women’s tennis), I’m going to have to bring Sachia home,â€ I don’t have any money,â€ said Liverpool. “She said ‘No, you can’t take her home, she could win the tournament…’She made a phone call and the USTA paid for a room for Sachia to stay.â€ Â Liverpool, however, had to leave.

A lot was at stake for then 17-year-old Vickery. If she won the National Championships, she would get a wildcard to compete in the U.S. Open and have the opportunity to earn “realâ€ prize money at WTA events. Liverpool was financially stretched to her maximum, meaning a loss would have likely meant the end of Vickery’s career.

“She ended up winning the tournament,â€ says a very proud Liverpool. Vickery not only went to the U.S. Open in 2013, but she also won her first round match, and went on to win a total of $50,000 in prize money that year.

“It did change a lot… just playing the bigger tournaments. The expectations were a bit more and I wasn’t used to that,â€ says Vickery.

Getting to the Grand Slams

Not only were the expectations more, but so were the costs. When Vickery started playing tennis at the age of 5, the costs were about $600 a month. Liverpool, a school teacher who migrated to the United States in 1987 from a small mining town called Kwakwani in Guyana, took a job as an agent, and then a flight attendant at now defunct airline, Pan Am soon after coming to the U.S.

When Pan Am went under in 1991, the company sent its employees to college. Liverpool took advantage of the opportunity, earned a degree, and got a job as a paralegal where she earned $35,000 a year. It was, however, still a struggle to raise Vickery and her now 23-year-old brother Dominique Mitchell, who plays football in graduate school at Campbell University after playing at South Carolina State University, and is working to make it into the NFL.

In addition to the typical costs associated with raising two young children on her own, Vickery’s tennis costs were rising dramatically. By the time she was 12-years-old, Liverpool was paying about $1,000 a month.

Undeterred in her quest to make sure her children could pursue their athletic dreams, Liverpool–who was now working in the admissions office at Kaplan University–began bartending at night at a club in a dangerous part of Miami. She earned nearly $2,000 a month in tips. In addition, her mother moved from Guyana to Florida to help mitigate childcare costs.

“So, I worked at Kaplan full time from nine to five, and then at nights I bartended from about 9:00 p.m., and I came home at 4:00 a.m. in the morning. I worked day and night for a couple of years. That’s the only way I could pay for her lessons and save a couple of hundred dollars a month if something happened.â€

In addition to a lifelong commitment to always save in case “something happened,â€ which Liverpool says was instilled in her by her mother, she is equally committed to staying out of debt. She has never borrowed money or had a credit card.

“Debt is too much of a stressful commitment to me,â€ says Liverpool. “I’ll always figure something out. We may have had to forgo a tournament to make a mortgage payment, but I have faith in myself, and my children learn by my actions. Many players borrow money from wealthy people and believe they’ll pay them back when they earn prize money. That seems like insanity to me. What happens if you get injured? I’ve instilled this in my children and taught them to live within their means. Part of having a successful life means being debt free,â€ she adds.

“It was tough to watch, especially as the oldest child,â€ says Mitchell. “I saw some of the nights where she would have bills scattered on the ground and she was in tears. We would have close to nothing, but she always found a way,â€ he adds.

Mitchell also found a way to help out by receiving full athletic scholarships to college and grad school, and getting jobs to pay his expenses, so that he would not be a financial burden on his mother.

5 ‘End of the Summer’ Events Happening in New York City

A Fresh Cut For a Fresh Start: Designed for Success