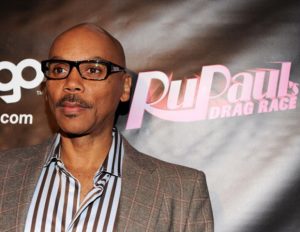 Aside from her multiple TV (All My Children, Sister, Sister and Sabrina the Teenage Witch) and movie appearances (Spike Leeâ€™s Crooklyn , To Wong Foo Thanks for Everything, The Brady Bunch Movie, A Very Brady Sequel and The Truth About Jane), RuPaul hosted her own VH1 talk show, The RuPaul Show, from 1996 to 1998. Nearly a decade later, LOGO premiered RuPaulâ€™s Drag Race, a reality series that follows 13 contestants around to find â€œthe next superstar drag queen of America.â€ Now in its fourth season, the showâ€™s rating rose 50% from season three, causing the latest season of RuPaulâ€™s Drag Race to become the highest-rated premiere to air on LOGO in network history. That success led two spin-off shows, RuPaulâ€™s Drag Race: Untucked, which follows the behind-the-scenes cat-fights and drama between queens while the judges mull over their fate; and RuPaulâ€™s Drag U, where drag â€œprofessorsâ€ transform the style of the everyday woman and help her unleash her â€œinner diva.â€

“I dedicate this nomination to outsiders everywhere,” RuPaul said in a statement when the nominations were first announced. “Brave souls who, against all odds, stick to their dreams and make the world a more colorful place. On behalf of those people–my tribe–I am so grateful.” But he also gave Vulture the infamous quote that he could care less about mainstream awards: “I’d rather have an enema than an Emmy.” But in a video shot since winning, he accepts his trophy and acknowledges that Emmys and enemas are not mutually exclusive.

Straight Out of Oz

Much to my pleasant surprise YouTube sensation Todrick Hall joined the judging panel this season. He is a quadruple threat when it comes to his talents in singing, acting, directing, and choreographing his videos. A must-see for anyone who loves theatrical storytelling is the hour-long visual album on YouTube called Straight Outta OzÂ that Hall released this past June (inspired by BeyoncÃ©’s Lemonade). He first rose to prominence as a contestant on the ninth season of American Idol, making it to the semi-finals. Starting Nov. 1, Hall will assume the lead role of Lola in the hit Broadway musical Kinky Boots.

I have been a fan of the 55-year-old RuPaul since he first achieved international fame with the hit song “Supermodel (You Better Work)” in 1993Â after he had already become a popular fixture on New York City’s nightclub scene. Before there was Lip Sync Battle, there were drag queens going at it since Logo debuted RuPaul’s Drag Race, which marked its eighth season this year. Â On the All Star show, instead of lip-syncing for their lives (RuPaul’s catchphrase), the drag queens are lip-syncing for their legacy.

Though it has a huge gay following,Â RuPaul’s Drag Race has been divisive at times among members of the trans community who complained that they were getting ‘confused’ with drag queens. Drag is a form of performance art that involves jumping between different genders and characters. Transgender is used to describe someone whose gender identity differs from the sex the doctor marked on his or her birth certificate. Some past contestants on RuPaul’s show have since come out as transgender such as modelÂ Carmen Carrera.

In 2014, the drag competition reality showÂ attracted a barrage of criticism from trans activists for a segment in which contestants were asked to guess from a photo whether someone was a ‘female or she-male.’ Network executives subsequently opted toÂ drop the show’s ‘You’ve Got She-Mail’ catchphrase and Ru signed a sensitivity pledge.

Love him or leave him, RuPaul notably is an unapologetic, openly gay man and over the past eight years his reality show has made inroads in helping spread awareness about tolerance, inclusion, and respect for lesbian, gay, bisexual and transgender people.

Ask The Inventress: Why This 75-Years Young Inventor Says It’s Never Too Late