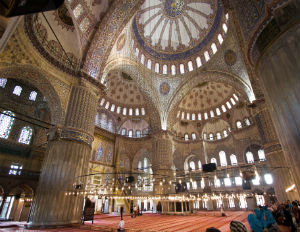 On Wednesday, President Obama journeyed to the Islamic Society of Baltimore, one of the country’s largest centers for Muslim worshippers. This visit to a mosque, the first of his presidency, comes amid the rise of anti-Islam sentiment as evidenced by the vitriolic rhetoric currently spewing from a few GOP candidates and certain media outlets.

During his visit, Obama implored those in attendance to aid him and his administration in combating intolerance. “None of us can be silent,â€ he said. “We can’t be bystanders to bigotry. And together, we’ve got to show that America truly protects all faiths.â€

President Obama also reassured Muslim Americans of their place in society. “You’re right where you belong,â€ he said. “You’re part of America too. You’re not Muslim or American. You’re Muslim and American.”

The visit was met with criticism from the usual suspects, with Donald Trump leading the pack. In an interview with Fox News’s Greta Van Susteren, Trump reverted to his well-worn insinuation that President Obama is a Muslim, snidely suggesting that “maybe he feels comfortable there.”

This behavior has come to be expected of Trump, a petulant businessman who spent this week throwing Twitter-tantrums and accusing Ted Cruz of “cheating” in the Iowa caucus that resulted in his second-place finish.

“Look at today–he gave a speech at a mosque,â€ Rubio continued. “Oh, you know, basically implying that America is discriminating against Muslims. Of course there’s going to be discrimination in America of every kind. But the bigger issue is radical Islam. And by the way, radical Islam poses a threat to Muslims themselves.

But again, it’s this constant pitting people against each other–that I can’t stand that. It’s hurting our country badly,” Rubio said.Â

“We can disagree on things, right? I’m a Dolphin fan, you’re a Patriot fan.”

Although this is not the first time Rubio has engaged in worrisome rhetoric regarding Muslim Americans, these remarks are particularly bewildering. Perhaps Sen. Rubio did not bother to listen to the entirety of President Obama’s remarks, but telling a roomful of Muslims Americans they are “part of America too” and “not Muslim or American,” but “Muslim and American” doesn’t exactly register as divisive.

Rubio would do well to remember that he is running to be the president of the United States. Emphasis on “United.”

These illogical attacks on efforts to combat discrimination and increase inclusion feed into the ugliest part of humanity and are the true sources of divisiveness.