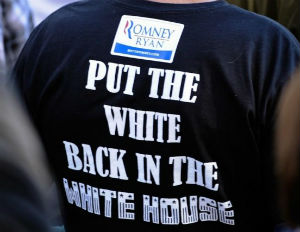 At a campaign rally for Mitt Romney in Lancaster, Ohio, a man was photographed by a Getty photographer wearing a t-shirt that read “Put The White Back In The White House.”

The picture has been shared on news outlets and political blogs.

A Romney representative told Buzzfeed that the shirt was “reprehensible and has no place in this election.â€

The Romney campaign has been hunkered down in the Buckeye State as the election draws nearer. Romney has surged in the national polls since the first presidential debate, but he’s still trailing in Ohio, which is a must-win for him.

Florida to Use Different Academic Standards for Students by Race