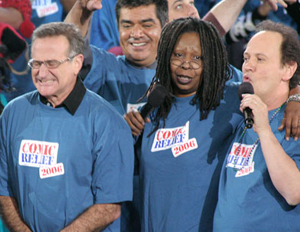 Generations of fans of the late Robin Williams recall how the comedic talent along with comrades Whoopi Goldberg and Billy Crystal were the face of the groundbreaking Comic Relief specials, a fundraiser for America’s homeless, for two decades. The trio were chosen to co-host Comic Relief’s four-plus-hour maiden fundraiser and continued to do so from 1986 to 2006.

The non-profit Comic Relief USA’s charity work was ongoing, distributing funds toward providing assistance including healthcare services, to homeless people throughout the United States. But the Comic Relief TV special was an annual fundraiser that was held and televised primarily by HBO.

Williams, Goldberg, and Crystal along with other comedians, celebrities, and occasional politicians performed various segments of standup, sketch comedy, live music, and impressions. Documentary style segments dealt with real-life problems of homeless people, in order to raise awareness of not only the grim realities but also how many hard-working “ordinary” people can wind up or grow up homeless.

“When we started [Comic Relief], we had to figure out what would be a suitable cause. Nobody was more adamant than Robin that it should help the homeless,” Bob Zmuda, creator of Comic Relief, told The Los Angeles Times in a phone interview.Â “Robin came from a family with money—he was brought up with a silver spoon in his mouth, and I think he felt so blessed that he wanted to do something for people who weren’t brought up like that.â€

Zmuda told The Times that because of Williams, Goldberg and Crystal, Comic Relief has raised more than $80 million. “Robin was — you light a match and he’ll start performing,â€ Zmuda recalled.Â The Comic Relief shows even influenced a generation of comics, he added.

Goldberg has not reacted publicly to Williams’ death yet, but late on Monday night Crystal took to Twitter with the post, “No Words.â€

FROM THE CORNER OFFICE: Get Business Strategy from the Greats, Presented by BMW