REVIEW: Is 'Dear White People' Worth Your Precious Dollars?! 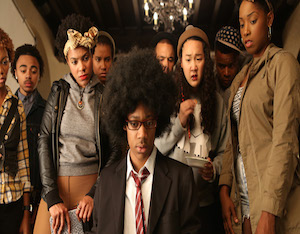 When Dear White People, written and directed by first-time filmmaker Justin Simien, made its debut at Sundace — it was admired by all those who witnessed it.

Taking place in the fictional university of Westchester College, the project riffs on situations experienced by Simien and told to us in satirical form. For a newborn effort, Dear White People pulls off a few surprises that will leave audiences engaged and ready for repeat viewings. Led by Tessa Thompson (For Colored Girls), who plays Samantha White, the film explores race with her as the audible rebel without a pause, breaking down what White people can and cannot do in this “post-racial America” setting.

As Sam exposes the politricks being used on campus to separate the masses, the sole all-Black residential house is under threat of dissolution by the university’s dean for reasons of diversification. All the while institutional discrimination — from other houses using race to exclude others to using family ties — has resulted in the stagnation of opportunities for the minorities who wish to get an education at Westchester. Dear White People is an American film for the Now-Generation that explores feelings of racial divide and natural common sense with a humor that is sharp, biting, and thought provoking.

As the movie opens and the audience witness more characters, the cast reflect certain racial power struggles that spill over into the audience’s lives conveniently. Take for instance the president (played by Peter Syvertsen) and the dean (Dennis Haysbert). Their struggles to one-up the other has been inherited by their respective sons, Kurt (Kyle Gallner) and Troy (Brandon P. Bell). Both are upstarts in their own right, but are merely pawns in their father’s game to become the de facto leader of Westchester and have the biggest bragging rights.

Entrepreneur, Thou Art Loosed! 5 Keys to Unlock Your Business!

Why Your Personal Life Impacts Your Professional Brand