For more than two decades, The Journal of Blacks in Higher Education has been stalwart in examining the progress of black students and faculty at American colleges and universities.

As important as this quarterly publication has been in black academic history, few knew that its founder, Theodore Lamont Cross, was white. Cross, an author, publisher, photographer, entrepreneur, and intrepid civil rights demonstrator spent the last 17 years of his life culling statistics and publishing them, exposing major racial imbalances in faculty appointments, graduation rates and admission, and doctoral degree awards. These disparities led him to found JBHE in 1993, which immediately became an indispensible source of information on the status of African Americans in higher education. Cross died Feb. 28 at the age of 86. A memorial is scheduled for April 9 at 2:00 p.m. at Princeton University Chapel in Princeton, New Jersey.

Cross’ colleagues and friends remembered the late civil rights champion and talked about the relevance of JBHE today.

“Ted Cross’ goal in starting the journal was to create a competitive environment where publicized data on the progress and status of blacks at some institutions would compel other colleges and universities to keep pace,â€ said Robert Bruce Slater, managing editor of JBHE.

Amy Gutmann, president of the University of Pennsylvania, honored JBHE and Cross in a commemorative essay saying, “JBHE has served as both a bellwether and an important instrument in the ongoing struggle for truly equal opportunity in higher education, directing meaningful deliberation about the experience of African-American scholars and students, and making the strongest case–always on its merits–for equal access to our nation’s colleges and universities.â€ She wrote that cross will be remembered for his “…commitment to equal opportunity, his love of higher learning, and his passion for rooting out all injustices.”

“The Journal has always placed perhaps its greatest emphasis on statistics and other hard, typically elusive facts rather being a vehicle for rhetoric and special pleading,â€ shared Arnold Rampersad, professor Emeritus in the Humanities at Stanford University. “Mr. Cross unselfishly and generously brought not simply a liberal conscience and consciousness to bear on the key matter of black higher education but also an acute sense of what was needed and critically important.â€

“Ted Cross did American education a tremendous favor by concentrating on the material dimension of blacks in higher education. Armed with the numbers, he wouldn’t let wild statements and phony accusations go unchallenged or let excuses fly about the lack of qualified black faculty,â€ said Professor Nell Irvin Painter who worked with Cross on Princeton University’s African-American Studies advisory board. “Issue by issue, JBHE laid out the wealth of scholarship in the field of black studies, particularly that by black authors. And by profiling our rich historical tradition, he resisted the temptation to view black scholars as some sort of recent invention.â€

Memorial contributions can be made to the Theodore Lamont Cross Scholarship Fund at Amherst College, Amherst, MA 01002-5000 and/or Doctors Without Borders, P.O. Box 5030, Hagerstown, MD 21741. 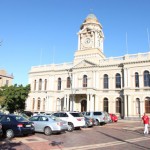