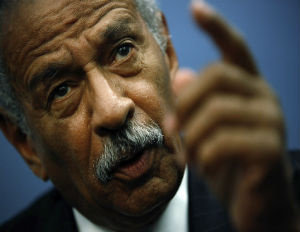 Last week Congressman John Conyers (MI-13) and Senator Elizabeth Warren (D-MA) sent a letter to Federal Reserve Chair, Janet Yellen, calling for more “diversity in its leadership and to focus its attention on the high rates of unemployment in communities of color across the country.”

The letter was signed by 127 members of both Congress and Senate.

A statement from Rep. Conyers’ office called the letter the “latest effort by Rep. Conyers and his Full Employment Caucus to focus attention on the impact of the Federal Reserve’s policies on communities of color. “

“Far too often, the voices of minorities are silenced because they aren’t sitting at the table,â€ said Congressman Conyers. “The Federal Reserve needs leadership that models the diversity that exists in this nation. Detroit and cities across the country with high minority populations have some of the highest unemployment rates and will be harmed if the Federal Reserve does not consider our needs when they make key policy decisions. Increasing diversity at the Federal Reserve will help ensure that the needs of people of color, women, labor, and consumers are part of the crucial conversations at our nation’s central bank.â€

The statement also noted that 11 of the 12 current regional Federal Reserve Bank presidents are white. In fact, no black person has ever served as president of one of these banks.

The statement also pointed out that the black unemployment rate of 8.8% is double that of whites.

“By fostering genuine full employment, the Federal Reserve can help combat discrimination and dramatically reduce the disproportionate unemployment faced by minority populations…employment discrimination against women and minorities decreases as our economy approaches full employment. The data is unambiguous: even when comparing workers with the same levels of education, African-American workers face higher unemployment rates and are paid less than their white counterparts, women make less than their male counterparts, and women of color are particularly disadvantaged.â€

Tiny Projector Turns Your Wall Into a 150-foot TouchScreen!