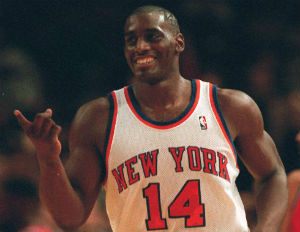 Longtime NBA player Anthony Mason who died on Saturday due to congestive heart failure was honored this weekend with a moment of silence before the New York Knicks win against the Toronto Raptors (103-98) as well as at Texas A&M.

Mason, 48, was a 13-year NBA player who played for six teams but was best remembered for his five-years with the Knicks, according to ESPN. Â During his time with the Knicks he is most noted for helping the team, along with teammates Patrick Ewing, Charles Oakley and John Starks reach the NBA Finals in 1994.

Winner of the 1994-95 NBA’s Sixth Man Award, Mason also played for the Charlotte Hornets, Milwaukee Bucks and the Miami Heat during his professional basketball career, according to ESPN.

“We would like to thank everyone for their heartfelt thoughts and strong prayers,” said the Mason family in a statement on Saturday. “Anthony felt each and every one. He fought like a warrior to the very end. Please keep your prayers and thoughts with us through this very hard time — it is a great loss for us. We ask for our privacy during this time.”

Mason’s son Antoine plays basketball for Auburn University. At the Auburn vs. Texas A&M game on Saturday, the team held a moment of silence for the Mason family.

The Job Market for Older Workers Over 50 Looks Up

Women of Power: Most Powerful Corporate Women Talk the Value of Mentorship