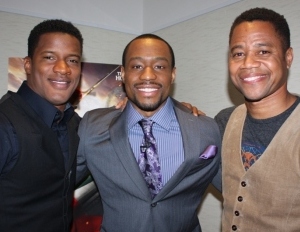 I put up $60 million and went to the studios to put in the other $35 million.Â  They didn’t want to so I had to put that up too, just because nobody else would do it. [Red Tails] is a chance to prove that black films can make money. If that happens there will be more black films.

Every great accomplishment had someone to champion it along the way. For the black cinematic community it was magical to have been championed by George Lucas.Â  Plus, the use of green screen is one that we really haven’t been afforded. Â Now, we’re working with the master of it, the inventor of it–and what we have been able to do is tell an incredible story.

Cuba Gooding Jr. on history’s neglect of the Tuskegee Airmen and pressure of having them on the set:

When I was twenty-one doing my first Tuskegee film [for HBO], I had finished my schooling and knew nothing of the Tuskegee Airmen. I have two boys now, ages 15 and 17, and I’ve made it my mission to make sure this doesn’t happen to them.Â  .

We had real airmen on set [Lt. Col. Lee Archer and Dr. Roscoe C. Brown]. What was intimidating was seeing them at the screening.Â  That was scary because all you could do was be judged on how much truth you told.Â  I was looking over the shoulders of a couple of Airmen sitting in the theater and they weren’t really moving. I was like ‘oh man, are they awake?’ Then I noticed one’s shoulders doing ‘this’ as the dog fights were happening on the screen and his hands moving ‘like that’ flying the plane from his seat. I just had tears in my eyes.

Actor Nate Parker on working with the cast:

There was no room for selfish, no room for ego. Worst case scenario, this represents the last time there are [financial] resources.

Our World with Black Enterprise airs its exclusive Red Tails movie special on TV ONE this Sunday, January 15 at 10:00 a.m. EST and on local stations across the country all weekend.

Check your local listings and visit dev.blackenterprise.com/ourworld for additional time and station information.

Mario Van Peebles Captures Youth Culture With ‘We the Party’