The fulfillment of Barack Obama’s presidential dream gave newly minted recording artist David Minott (known musically as David M.) the impetus to revisit his own dream. “It made me think that things that seem out of reach are right before you if you work hard enough,â€ he explains. “Lest We Forget,â€ the first single on Minott’s debut album, Here Comes Your Life, was brainstormed 15 years ago, inspired by another historic moment–Nelson Mandela’s presidential inauguration and the dismantling of apartheid. But for Minott, a native of Jamaica, the transition to singer-songwriter meant a sabbatical from a hugely successful family business.

Minott and his brother Chester operate Minott Services, the largest waste disposal and janitorial services company in Jamaica, with branches nationwide. After their father’s passing, the brothers took over the company, expanding what their father created into three separate companies with a focus on labor management and chemical manufacturing with a workforce of more than 1,300.

Although Minott began studying piano at age 6, his father insisted that his children pursue professional careers. “He grew up poor and wanted us to have everything he didn’t,â€ Minott says. After receiving his law degree, Minott moved to New York in hopes of beginning a songwriting career, but when no opportunities materialized, he returned to the family business. Although his demo tape attracted the attention of Augustus Clarke, a respected Jamaican music producer who contracted him to write songs for popular local artists, including Freddie McGregor and Gregory Isaacs, most of the attempts at selling his songs were disappointing. The family business was flourishing, but his passion for music still haunted him.

Obama’s victory encouraged Minott to again shop “Lest We Forget,â€ which pays homage to the struggle for human rights. In 15 years, Minott was unable to interest anyone in the song. “Artists were more interested in singing about relationships than in black pride,â€ he offers. This time, however, the music industry also seemed more inspired, and the song Minott performed was enthusiastically received and began playing on the radio.

“When people know you as a business person, then you say you want to be an artist, you get strange looks,â€ says Minott of his dual duties. His brother and partner in business, however, has been his biggest supporter. “He gave me space to pursue my dream, and I couldn’t have accomplished this without him. These songs are my vision. “I have the opportunity to produce exactly the kind of music I love.â€

To Love or to Loathe? 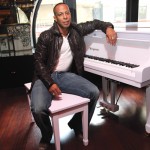 A Taste of the Good Life