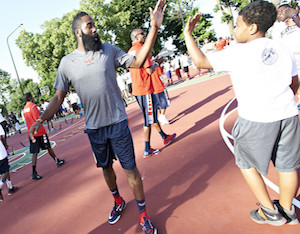 Last week, yours truly represented the BlackEnterprise.com brand alongside NIKE, Inc. and USA Basketball as they prepped for the World Basketball Festival.

Aiming to make an impact in Chicago amidst practice, summertime weather, and insane violence in the surrounding neighborhoods—Nike and Team USA united the community through the shared love of the game. Kicking off Aug. 14, the 2014 Nike World Basketball Festival allowed hoop fans to get an up-close and personal view of the featured members of the 2014 USA Basketball Men’s National Team as they prep to go for Gold.

A myriad of colorful journalists and I were treated to a event-filled week that found us traveling around the Chi, meeting local legends and street ballers, and witnessing Team USA gear up to face global competition. The moments I spent there were impactful—being a kid from the Midwest and an avid basketball fan—and with my first time in Chicago, I made sure to learn a lot.

From the Chicago Park District’s 63rd Street Beach House to the hallowed halls of Simeon High School, the trip was informative as I sat at the foot of giants such as NBA legend Scottie Pippen, Chi-Town street ball legend Sonny Parker, and veteran scribe Scoop Jackson. This theme was ingrained in me as I traveled down East Ontario Street: Basketball needs Chicago.

Basketball is the woven fabric that ties together all seams of the city. Each respective side of Chicago has a distinctive playing style that is represented from the local levels all the way to the NBA, with athletes like Derrick Rose and Anthony Davis playing for Team USA. Those sides all came together nearing the end of the experience at the Nike launched CHI-TALK, which served as a forum for Chicago youth to get some personal time with inspirational Chicago thought leaders.

Hosted by Kevin Carroll, the discussion included enriching conversations from guest speakers such as Coodie Simmons, Chike Ozah, Sheryl Swoopes, and Common. While I wasn’t personally present for this TED-Talk-esque presentation, I do know that Coodie and Chike definitely represented for the Chi and shared some boulder-like gems of knowledge for all those whom attended.

With basketball the talk of the town, community youth clinics sprung up like wildfire as more than 5,000 kids learned skills from the likes of James Harden, DeMar DeRozan and Kyrie Irving. Chicago’s rich basketball heritage was front and center during my time there with all who attended adding onto the legacy of what hoops mean to the Windy City.

As I and countless others witnessed our on-court superheroes suit up in preparation for the 2014 FIBA Basketball World Cup in Spain, it was an enjoyable learning experience that showcased Chicago’s beautiful architecture, incredibly delicious food and hospitality, and the legacy left behind by the likes of Michael Jordan, Scottie Pippen, and Sonny Parker.

Before the event kicks off Aug. 30, watch Cleveland Cavalier Kyrie Irving salute the BlackEnterprise.com readers, and check out the highlights from my time in Chicago in the gallery on the next pages.

Square To Give More Money To Small Businesses