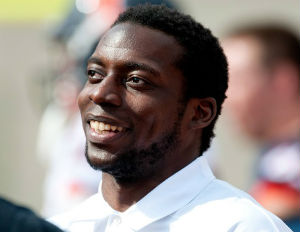 Last year, the Arizona Cardinals running back Rashard Mendenhall released a wonderfully written, excited and eloquent statement to the world – declaring that he was retiring from the NFL to pursue other things. It was hard to not share in the excitement for this young person that had already reached the height of his profession, and was choosing to take his legacy, as well his fortune, and explore the world.

“As for the question of what will I do now, with an entire life in front of me? I say to that, I will live. I plan to live in a way that I never have before, and that is freely, able to fully be me, without the expectation of representing any league, club, shield or city. I do have a plan going forward, but I will admit that I do not know how things will totally shape out. That is the beauty of it. I look forward to chasing my desires and passions without restriction, and to sharing them with anyone who wants to come along with me. And I’ll start with writing.â€ he wrote.

Earlier this week, it came to light that Mendenhall had indeed made good on his declaration. Reports began to surface that he was one of the writers behind the new HBO show Ballers, which premiered last Sunday. The show is centered around a character played by former professional wrestler and current movie star Dwayne ‘The Rock’ Johnson, and co stars familiar names like The West Wing’s Dule Hill, and singer LeToya Luckett. It’s also executive-produced by Mark Wahlberg, whose previous series Entourage is currently heating up theaters as a full-length summer blockbuster.

Initial reactions to the show have been positive, and per a report, the shows debut drew 2.16 million viewers, making it the second most watched HBO comedy episode, just behind “Entourageâ€ – which because of the shows tone as well as Wahlberg’s involvement, is a series that it’s drawn many comparisons to.

For Mendenhall, a Super Bowl champion that earned over $13 million during his six seasons in the league – being able to write for the television show is a dream come true. In an interview earlier this year, Mendenhall said of the opportunity, “I jumped right into something, and it was really cool and enjoyable, because writing was something that I always enjoyed and coincidentally Â had to do with football – something that I loved,” Mendenhall told Jones. “It was a really natural and cool and beautiful thing to be a part of.”