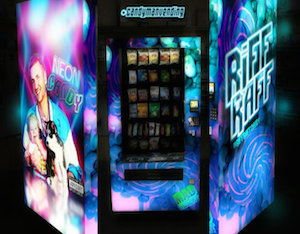 If you’ve never heard of Candyman Vending, thanks to the powers of rap and hip-hop, you will not forget the name after reading this.

Andre Bramwell, CEO of Candyman Vending, is looking to present his unique idea for snacks/candy dispensary to the masses by partnering with rappers RiFF RAFF and Krayzie Bone.

In an exclusive chat with HipHopDX.com, Bramwell said that he always knew that he would combine his vending talents with the music industry, even if he didn’t know exactly how he would do it. Twitter was the bridge between the two worlds, as Bramwell came across the page of C. Stone The Breadwinner, an independent artist who was looking for promotional products to put in a music video.

Within moments, Bramwell created an idea that would alter the direction of his company. “It just popped in my head that I could do a custom machine design that he could promote his brand and products in and give the artist a crazy new way to promote and make extra money as well,” Bramwell exclusively told HipHopDX.

After working with C. Stone, RiFF RAFF, whose debut album “NEON iCON” hit stores this year, came a-calling. The popular Houston, Texas, rapper quickly wanted a vending machine that he could utilize to promote his career and album. The buzz created word within the music industry and acts like Soulja Boy, OG Ron C, Krayzie Bone, and others immediately came calling. All this despite only starting the company six months ago.

“My vending network allows the artist to get their own customized vending machine and ATM to be placed in businesses, their own home, to use on tour, their own business or whatever they may like,” Bramwell said. “The custom machines that are placed at businesses will allow them to get a commission from the machines as well as an extra promotion of their brand so it’s a win-win situation.”

On the next few pages, check out RiFF RAFF and Krayzie Bone’s customized vending machines.