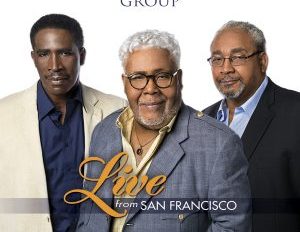 In wake of one of America’s nastiest presidential elections in years, gospel music legend Rance Allen recalls President Nixon’s contentious 1972 re-election campaign amid an era of controversial school busing, Vietnam War protests, and the start of the Watergate scandal. Back then, the Rance Allen Group’s music was just as socially charged as it was spiritually rooted, with message songs such as “Talk That Talk,â€ “Lonely Girl,â€ and “If I Could Make The World Better.â€ Recently, the Grammy award-nominated, fraternal trio released its 25th album,Â Live From San Francisco (Tyscot Records), which is ironically an inspirational continuum of the group’s early 1970s musical platform.

“This album’s theme is [about being] encouraged in a very depressed time,â€ says Allen, who is also pastor of the New Bethel Church (COGIC) in Toledo, OH. “It’s a time of unusual stress and disappointment with all of the killings going on, the political mess that’s going on, and there’s just so many people who have moved away from believing in Jesus Christ. Our job of encouraging and uplifting will never be done. We’ll have to keep working on this until the Lord comes to take us home.â€

The new 11-song album and its separately sold DVD boast the same retro R&B flavor that was in vogue during the 1970s, when the group toured regularly with the likes of Barry White, Isaac Hayes, and The Staple Singers. Some stand-out melodies include the bouncy “Got Me Dancin,’â€ the classic soul ballad “Like a Good Neighbor,â€ and “All Day Long,â€ which has engaging, mellow jazz tones.

Throughout, Allen’s signature vocal grunts and primal wails addÂ an extra dose of passion to the music. “No matter what Rance sings, whether it’s contemporary gospel or traditional gospel, it’s always anointed and authentic,â€ says Jacquie Gales Webb, a veteran broadcaster at WHUR 96.3 FM, in Washington, D.C. “He can sing a Thomas Dorsey hymn, and it will be just as good as if he did a Kirk Franklin song. The way that he sings a song is a spiritual thing–it’s not something you can learn in a class. It’s something that comes through him, not from him.â€

Allen finds it fascinating that the country is still debating social issues that he feels should have been settled decades ago. “I’ve got songs I could go back and pick out that would fit today’s social scene just like a glove,â€ he says of his group’s early Stax Records/Gospel Truth catalog. “I’m not a Christian who can avoid and not go through what the rest of the world is going through. I’m in the world. I’m just not of it. I see everything, I feel. I have opinions so when I write songs, all of that comes into play but my idea is always to say something positive. I think that comes from having your finger on the pulse of what’s going on around you. You have to see in order to know what to pray for. It comes from a mix of social awareness and me approaching it from a trust in God approach,â€ he says.

That approach is what has helped the Rance Allen Group remain one of gospel music’s star attractions with audio gems, such as “U That I Trustâ€ and “Something About the Name Jesusâ€ for over 40 years. The group has only had one No. 1 radio hit, “Miracle Workerâ€ (1991), in its entire career, yet remains a consistent, bestselling act. In an age when physical CD sales are declining, the Rance Allen Group continues to attract buyers for them. Their 2004 album The Live Experience (Tyscot Records), the group’s best selling project to date, has sold over 154,000 physical CDs, which was 95% of its total sales, according to Nielsen SoundScan. Their 2011 The Live Experience II (Tyscot Records) was another strong seller, with almost 50,000 sales in CDs and digital downloads.

Likewise, the group’s new Live From San Francisco project is expected to do well, because the group’s fan base continues to back up its loyalty at the checkout counter. “Our listeners love the Rance Allen Group,â€ says Brodric Purvis, music director at WLOU 1450 AM, in Louisville, KY. “The group has an unmistakable sound. Whenever we play something old or something new by the group, the phone lines light up, because the group has set a standard that they never fail to meet.â€

Allen, who voted early but declines to say for who, connects with his constituency in a manner that would make Hillary Clinton and Donald Trump green with envy. “He’s just wonderful,â€ says BET Producer Joyce Coleman, who has booked the group on several television programs over the years. “He’s like a rock star in gospel. People of all ages and women, in particular, just love him. They love that little dance he does. They love his beautiful grey hair, and they just love what he brings to the stage.â€

In terms of the stage, there are days when Allen, 67, doesn’t feel like performing, but then something comes over him. “Sometimes, I may hate to perform,â€ he admits. ” I hate it up until the time I go on stage. But when I get out there, man, you’re looking at a guy who loves what he’s doing. I love the challenge of engaging the listener and sharing the gospel with them. There’s nothing like it.â€