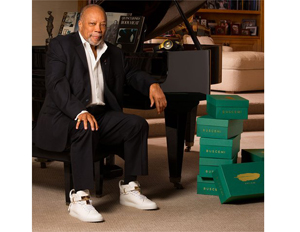 Black Enterprise’s Entrepreneurs Summit honoree Quincy Jones shows the world that at 82-years-old, he’s still the coolest man in show business. The genius producer of Michael Jackson’s Thriller, the best-selling album of all time, is the face of Buscemi spring ’15.

Several shots of the mogul surfaced, one in which he’s sitting at a grand piano dressed in a black suit, crisp white button down and the luxury sneakers. High fashion is nothing new to the music icon and father of actress Rashida Jones, though. In 2006, he and supermodel Molly Sims were the muses for a fiery Jimmy Choo campaign.

Quincy Jones and all his cool will be at the Entrepreneurs Summit in Atlanta, Georgia, May 13-16. Jones is a Trailblazer Award recipient for his 60-year-plus career as a multi-media and entertainment entrepreneur. He has made countless contributions, likeÂ his 1989 Grammy-winning Album of the Year,Â Back On The Block, which forged legends Dizzy Gillespie, Ella Fitzgerald, Sarah Vaughan and Miles Davis with modern influencers Ice T, Big Daddy Kane and Melle Mel. It was this vision that made the first fusion of bebop and hip-hop music.

See more from Jones’ Buscemi and Jimmy Choo campaigns on the next pages.

The Black Enterprise Entrepreneurs Summit hosted by Nationwide is set for May 13—16, 2015 at the Hyatt Regency Atlanta. Expect innovative sessions, high-powered speakers, and an early peek at the products, trends, and services you’ll need to stay ahead of the curve.Â  To register and find out more, visit dev.blackenterprise.com/es/. Join us at the Entrepreneurs Summit, Where Innovation and Capital Meet.

5 Colleges That Are Planning to Lower Tuition in Fall 2015