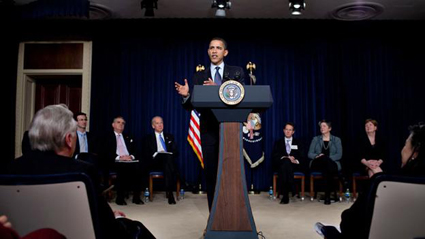 THE PRESIDENT:Â  Thank you, everybody.Â  Thank you.Â  Please have a seat.Â  Well, this says something — I don’t know what — about all of you, that I hear you really enjoyed this fiscal responsibility summit.Â  (Laughter.)Â  I mean, it’s a sign of a — (laughter) — something.Â  (Laughter.)Â  Illness, right.

I understand you guys had great breakout sessions, and my advisors just filled me in on some of the issues that came up.Â  I want to — I want to just provide a few opening remarks, and then we’ll just open it up for questions and comments.

The idea here was to bring everybody together because it’s been a long time since we had this conversation.Â  And over the last eight years, I think we’ve seen a continued deterioration in the government’s balance sheets.

My sense is that, despite partisan differences, despite regional differences and different priorities, everybody is concerned about the legacy we’re leaving to our children.Â  And the hope was, is that if we had a forum like this to start talking about these issues that it would turn out that there are real opportunities for progress — there are going to be some areas where we can’t make progress — but that we have more in common that we expect.Â  And I appreciate that while we may have different opinions, there’s a renewed willingness to put some concrete ideas on the table, even on those issues that are politically tough, and that’s real progress.

A couple of takeaways that my staff indicated to me.Â  There was a healthy debate on Social Security, but also a healthy consensus among some participants, including Congressmen Boehner and Hoyer as well as Senator Graham and Senator Durbin, that this was a moment to work in a bipartisan way to make progress on ensuring Americans’ retirement security.Â  And I think one of the things we want to do is to figure out how do we capture that momentum.

Over the longer run, putting America on a sustainable fiscal course will require addressing health care.Â  That seemed to be an issue that there was a lot of consensus around.Â  Many of you said what I believe, that the biggest source of our deficits is the rising cost of health care.Â  It’s a challenge that impacts businesses, workers and families alike.Â  And voices as varied as Senator Alexander, Douglas Holtz-Eakin to Senator Baucus and Senator Dodd and Representative Waxman, all agreed to try to tackle health care this year, which I think that offers extraordinary promise, although peril, as well.

The tax reform discussion underscored clear agreement that the tax process has to be simplified for all Americans.Â  The task force on the budget process yielded some unanimous agreement that the existing — existing process wasn’t working.Â  The question is whether we’ll have the commitment and discipline to

Up the Ante on Your Web Presence