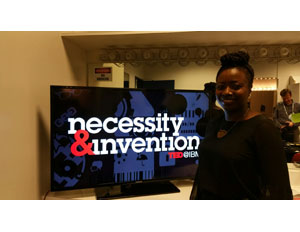 TED@IBM 2015: Necessity & Invention beckoned hundreds to San Francisco’s Yerba Buena Gardens. Attendees convened with a focused yet feverish excitement, securing seats before hosts Jose Gomez-Marquez, principal medical device designer at the Little Devices lab at MIT, and Dr. Jedidah Isler, an effervescent and engaging TED Fellow, who made history last year as the first African American woman to receive a Ph.D. in Astrophysics from Yale, took to the colorfully lit stage and introduced a dynamic roster of disruptors with topics ranging from sneakers to water mapping.

Water and the data revolution are Dr. Kala Fleming’s passions. Fleming, an IBM scientist who leads research in water management, also Â presented at TED. “Whether it’s underserved communities in the U.S., the Caribbean or West Africa, we’ve all got so many issues that are at the intersection of water, environment, and community development, and that has been my life’s work, ” explained Fleming, a native of Antigua who has devoted the last two and half years to IBM’s Kenyan Research Lab. In terms of diversity, she added, ” We are doing some really cool things in terms of how we are trying to find and tap markets that have potential. So imagine a company like IBM trying to be based in Nairobi and talking about data revolution and how do you do that? That takes balls!”

Denise Evans, VP of Women and Diversity B2B Marketing at IBM enthused, “I am so proud to have invited 30 men and women of color to this event. It is so exciting to see how it has grown exponentially from last year!”

Financial inclusion innovator, Eric Mibauri, a Kenyan native and graduate of MIT and Stanford who declined IBM’s Silicon Valley offer to accept a job in his homeland at IBM’s Research Lab, emanated a palpable excitement describing the far reaching impact of mobile money in Africa.

“It’s a game changer. Right now, we are dealing with microloans … $20 to $500 max, but at the next level, when banks see that you can pay, you can take a loan of $1,000-$10,000 and, in Africa, that allows you to start a micro-enterprise. One of the biggest impediments to people succeeding with economic activity is getting that kick start. We may start with personal loans, but then graduate to business loans. That means we (will) have a million people who are much more economically protected than they were before, and that is what I am looking at, for me–that’s the future.”

On the day of the conference, visionary inventor Chieko Asakawa, who lost her sight during a swimming accident at the age of 14, was thrilled that IBM Research and Carnegie Mellon announced the first open platform designed to support the creation of smart phone apps that can enable the blind to better navigate their surroundings. The NavCog app analyzes signals from Bluetooth beacons located along walkways and from smartphone sensors to help enable users to move without human assistance, whether inside campus buildings or outdoors. Asakawa, lead developer in advancing Web accessibility, including digital Braille, was invigorated by the audience’s response to her invention. “My goal is to achieve real world accessibility and so if people think they can work with us for that, I will be really happy. “