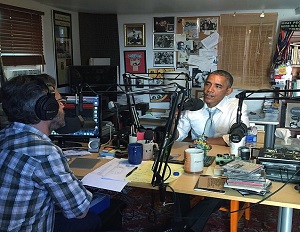 In a podcast interview released Monday with comedian Marc Maron, President Obama spoke openly about racism in America today, pointing out that just because it’s no longer polite to say the n-word in public does not mean that racism does not exist.

“Racism, we are not cured of it,” the Associated Press reports Obama saying during Maron’s WTF podcast. “And it’s not just a matter of it not being polite to say nigger in public. That’s not the measure of whether racism still exist or not. It’s not just a matter of overt discrimination. Societies don’t, overnight, completely erase everything that happened 200 to 300 years prior.”

While the president acknowledged that attitudes about race have improved since he was born to a white mother and Kenyan father, he said the legacy of slavery “casts a long shadow and that’s still part of our DNA that’s passed on.”

[Related: [WATCH]President Obama on Charleston Shooting: ‘I’ve Had to Make Statements Like This Too Many Times’]

In addition to weighing in on racism, President Obama also talked about the need for better gun control while referencing the 2012 Sandy Hook incident and the recent shooting death of nine black church members in Charleston, South Carolina.

“I will tell you, right after Sandy Hook, Newtown, when 20 6-year-olds are gunned down, and Congress literally does nothing — yes, that’s the closest I came to feeling disgusted,” he said. “I was pretty disgusted.”

While Obama says he respects Americans who use guns for hunting and sportsmanship, he added, “The question is just is there a way of accommodating that legitimate set of traditions with some common-sense stuff that prevents a 21-year-old who is angry about something or confused about something, or is racist, or is deranged from going into a gun store and suddenly is packing, and can do enormous harm,” referencing South Carolina shooter Dylann Roof who is now facing nine counts of murder in connection to the shootings last Wednesday at Emanuel AME Church.

According to AP, the interview was conducted Friday in Maron’s Los Angeles garage studio, close to where the president attended Occidental College. He said he did the interview because he wanted to reach a nontraditional audience and “break out of these old patterns that our politics has fallen into.”

To listen to Obama’s full interview head to wtfpod.com. 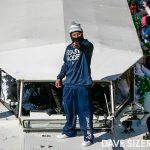