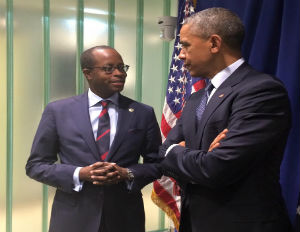 President Obama has been labeled by Press Secretary Josh Earnest as “the greenest president we’ve ever had,” with his latest efforts working to highlight the impacts of climate change on America’s health.

On Tuesday, President Obama visited Howard University to announce the launch of his new initiative that will provide data on the health effects of global warming, as well as data from the Centers for Disease Control and Prevention and other federal agencies in regards to the health risks of climate change. In a roundtable discussion, Obama spoke with Howard’s President Wayne A.I. Frederick, as well as medical and environmental officials about the administration’s plan to have U.S. greenhouse gas emissions reduced by at least 26 percent by 2030 in order to not only protect the environment, but also provide good health.

“I want everybody to start recognizing the costs of inaction, and recognize that the costs of inaction are even higher than the costs of action. In the same way that there are costs associated when you have severe drought or significant wildfires or the kinds of storm surges that we saw in Hurricane Sandy, well, there are public health costs, as well,” The Washington Times reports Obama saying. “And we’re ultimately going to be better off being proactive getting out in front of this thing, as opposed to [being] reactive where we pay a whole lot more in pain and suffering as well as in terms of trying to deal with the back end of the problem.”

In addition to speaking with officials, Obama also announced plans to take his initiative a step further by forming a coalition with deans from 30 leading medical and nursing schools who are “committed to ensure the next generation of health professionals is trained to address the health impacts of climate change.”