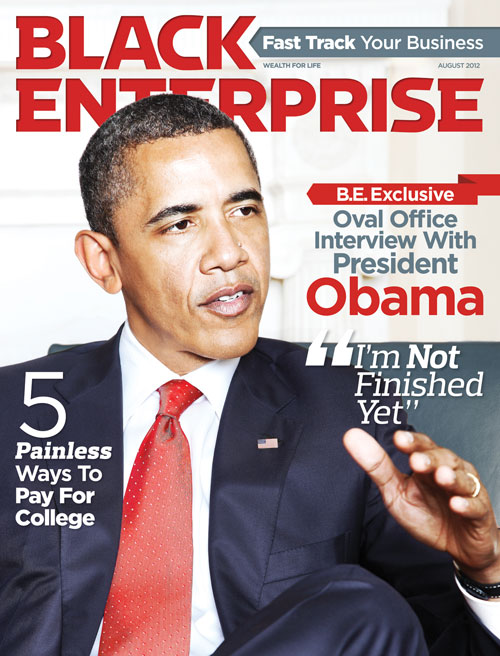 In three months voters will head to the polls to decide whether to give President Obama a second term. This election will communicate whether the electorate believes his continued occupancy of 1600 Pennsylvania Ave. will fulfill his promise of sustained economic growth and shared prosperity. Black Enterprise recently gained the opportunity to interview him for the first time in the Oval Office. In a Q&A session with BE Editor-in-Chief Derek T. Dingle, he talked about his support of black business, policies to advance small companies, and completing his ambitious agenda.

As you campaign for re-election, what do you communicate to black businesses that will make them enthusiastic supporters?
The first thing is to understand that we have just gone through the worst financial and economic crisis in our lifetimes. And my first job as president was to make sure that we didn’t slip into a second Great Depression. We were losing 800,000 jobs a month. Banks were locked up. Credit was frozen. The auto industry was about to go under. And because of the steps that we took, we have now seen two straight years of job growth, 4 million jobs created, [the] strongest manufacturing growth since the 1990s, unemployment has started to come down, and the auto industry is back. All of those steps that we took had an impact on black businesses just like they did businesses generally.

Let’s take the auto industry. You know the number of black businesses that are involved in the supply chain and that are involved in various services, whether it’s advertising or other aspects of the industry. They have all been impacted positively by the steps that we took. Now does that mean that we’ve done enough? Absolutely not.

The African American community ends up being hurt during recessionary times more than the population at large. [The] African American unemployment rate is still way too high. You had a credit crunch for small- and medium-sized businesses that disproportionately impacted African American businesses. But part of what we have been able to do is to specifically focus on disadvantaged businesses, disadvantaged communities. The Small Business Administration, for example, which is a significant source of financing for minority- and women-owned businesses, has stepped into the breach by expanding their loan portfolios and cutting their fees at a time when a lot of banks and other financial institutions just pulled back. Some of the work that we did legislatively, like the New Markets Tax Credit, makes a huge difference specifically for African American businesses.

How do you respond to criticism that your administration hasn’t done enough to support black businesses?
My general view has been consistent throughout, which is that I want all businesses to succeed. I want all Americans to have opportunity. I’m not the president of black America. I’m the president of the United States of America, but the programs that we have put in place have been directed at those folks who are least able to get financing through conventional means, who have been in the past locked out of opportunities that were available to everybody. So, I’ll put my track record up against anybody in terms of us putting in place broad-based programs that ultimately had a huge benefit for African American businesses.

The resurrected financial services industry hasn’t stepped up in terms of providing adequate capital to small- and minority-owned businesses.
There is no doubt that American taxpayers stepped in and pulled the banking industry out of the fire. It was controversial. It was messy. Ultimately it was the right thing to do for the economy. But it is true that once banks got back on their feet they haven’t been as aggressive in lending to small and medium-sized businesses as we would like. And I’ve had conversations with the major banks about this issue. What they will say is that some of the additional regulations have impeded some of their capacity to lend. We don’t see major evidence of that.

What we are trying to do is to work systematically with the banks and Tim Geithner [at] Treasury, Karen Mills at SBA, and our economic team here in the White House to bring together the financial sector with some of the creditworthy small businesses.

Major corporations have received billions in government contracts meant for small businesses. How is your administration addressing this?
This has been historically true. Federal contracting is so complicated and the scale of the contracts are so large that unless you had a Washington office–lawyers, a battery of accountants, etc.–you couldn’t navigate through the federal procurement process. I told every single member of my cabinet, “I want you to increase transparency, simplify the process, make sure that the goals that we have for small, minority-, women-, and veteran-owned businesses are prioritized inside your agency, and think about other ways that we can break up these contracts into smaller pieces so that smaller businesses could actually bid for them. And we’ve actually seen significant progress in a lot of these agencies.

Black unemployment still stands at nearly 14%. How do you communicate that the economy is headed in the right direction?
Most economists will tell you that there is no doubt the economy has gotten stronger, but we are digging ourselves out a deep hole. There are a lot more things we could be doing. To get them done, we need cooperation of Congress. We got the payroll tax portion of [my American Jobs Act] done, but what we didn’t get done is the assistance I was proposing to the states to help them hire back teachers, firefighters, and first responders, because one of the weakest parts of this recovery has been state and local government hiring.

Given the weaknesses of the construction industry, the American Jobs Act proposed that we rebuild schools, roads, bridges, airport, and ports. That would provide small businesses with opportunities as contractors and vendors in this rebuilding process. Again, Congress needs to act.

What about housing?
Something that has disproportionally affected a lot of minority communities around the country, both African American and Hispanic, [is that] they were preyed upon when it came to predatory lending. What we have been able to do is to help those who have mortgages held by government-sponsored enterprises Fannie Mae and Freddie Mac. We have been able to help them refinance at historically low rates, which saves somebody as much as $2,500 a year. And that’s money in their pockets that they can either be spending at your local small business or [to] help them rebuild equity in their homes.

My goal, not just leading up to the election but as long as I’m president of the United States, where we have the capacity to act on our own through the executive branch to widen opportunity or to give small businesses a fair shot, we are going to do it.