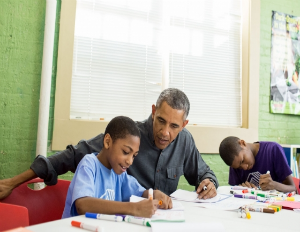 In honor of Martin Luther King, Jr. National Day of Service, President and First Lady Obama commemorated the federal holiday by giving back and encouraging others to do the same. Joining The Obamas was Vice President Biden, Cabinet Secretaries and Senior Administration Officials.

Youth at the Boys & Girls Club of Greater Washington were a lucky bunch on Monday, January 19, as President and First Lady Obama chose them to spend the day of service with. In press photos from the events, President Obama and the First Lady sat at classroom tables, side-by-side with the youth engaging in conversation and artwork. Senior Advisor Valerie Jarrett, Assistant to the President and Cabinet Secretary Broderick Johnson, and Corporation for National and Community Service (CNCS) CEO Wendy Spencer also participated.

Vice President Biden delivered remarks at the Organization of Minority Women’s 31st Annual Dr. Martin Luther King Jr. Breakfast. The breakfast, which took place at the Chase Center on Wilmington’s Riverfront, commemorated the legacy of the great ‘Drum Major of Justice for all People,’ the Reverend Martin Luther King, Jr. and paid tribute to the late State Representatives Al and Hazel D. Plant.

With one voice, we must ensure the scales of justice work equally for all — considering not only how justice is applied, but also how it is perceived and experienced. As Dr. King told us, “injustice anywhere is a threat to justice everywhere,” and this remains our great unfinished business.

Service Projects throughout the Nation: