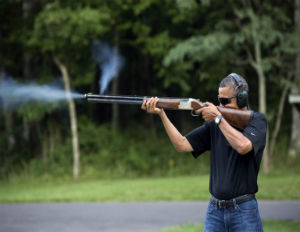 The White House released a photo of President Barack Obama firing a shotgun, smoke still emanating from the barrel as the country still reels from a recent uptick in gun violence. This comes just days before a summit in Minneapolis in which the president is expected to discuss gun control.

The White House may want to show that the president is not opposed to guns, but only advocates for more controls. In a recent interview with The New Republic magazine, Obama said “yes” when asked if he has ever fired a gun. He said he shoots skeet all the time at Camp David in Maryland.