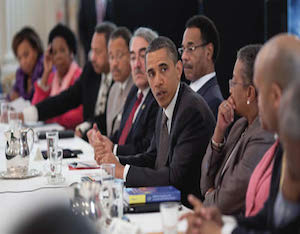 During President Barack Obama’s remarks at this year’s Congressional Black Caucus annual awards dinner, the commander in chief spoke on the widespread mistrust of law enforcement, as was demonstratedÂ in Ferguson, Missouri, after the shooting death of Michael Brown.

Fatal police shootings of unarmed black men have become a trend in the U.S. Obama says that because most Americans believe that the criminal justice system treats people of different races unequally, this is “having a corrosive effect on the nation, particularly on its children.”

That’s why those who reside in these communities are often wary about calling upon law enforcement for help. “It makes folks who need strong policing reluctant to go to the police because they may not trust them,” Obama said. “And the worst part of it is it scars the hearts of our children. That is not the society we want. It’s not the society that our children deserve,” Obama said.

The president’s addressing of the Aug. 9 shooting of 18-year-old Michael Brown in Ferguson, Missouri, signifies an important moment in American history. Obama said that Brown’s death and the raw emotion it produced exposed the “gulf of mistrust” between residents and police. “Too many young men of color feel targeted by law enforcement – guilty of walking while black or driving while black, judged by stereotypes that fuel fear and resentment and hopelessness,” the president said.

That same night in Ferguson, there was more gun violence. AÂ police officer investigating suspicious activity was shot in the arm. The wounded officer is expected to make a full recovery. Meanwhile, police there were looking for two suspects early Sunday morning.

Obama’s last announcement at the Congressional Black Caucus dinner was the addition of a community challenge to My Brother’s Keeper, the public-private partnership he launched to help improve the lives of young men of color.

Across the U.S., small-to-large communities will be challenged to adopt strategies to help all young people succeed from the cradle through college to career. The government, according to President Obama, cannot play the primary role in the lives of children but “it can bring folks together” to make a better difference in the country.

4 Tips for Purchasing a Franchise Business