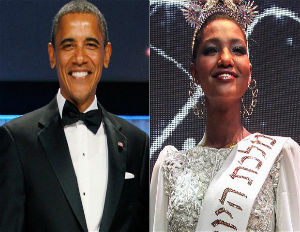 President Obama will meet the first Black Miss Israel at a dinner party in Israel this coming Thursday, the Telegraph reports.

The dinner is being held by Israel’s President Shimon Peres who decided to invite the 22 year old Yityish Aynaw, to the gala dinner after he heard about how she became the first Israeli of Ethiopian origin to win the country’s top beauty prize.

Aynaw told a newspaper that Mr. Obama’s status as America’s first black president had inspired her to write an essay about him.

“For me, he is a role model who broke down barriers, a source of inspiration that proves that every person really can reach any height, regardless of their religion, race or gender,” she said.

Job Seekers: How to Win the Post-Interview Waiting Game