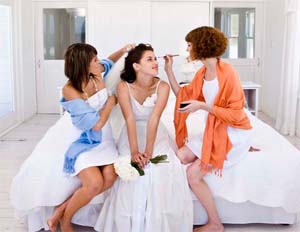 If you’re thinking of tying the knot this wedding season, you may find yourself adjusting to more than just your new marital status.

[Related: Black Wealth: A Growing Force to be Reckoned With]

Here are four scenarios in which a bonus or penalty may occur:

1. Bonus likely for two childless spouses who work, but one earns most of the money: Say you make $25,000 at your job and your spouse makes $50,000. If neither of you has kids and you don’t itemize deductions, your combined federal income tax burden would go down by $225 in 2015 compared to what you paid before marriage, according to the foundation.

The reason: Thanks to the wider income brackets for joint filers, less of the higher earning spouse’s salary would bleed into the 25% bracket. So less of your combined taxable income would be taxed at his or her top rate.

CNN reports a bonus is also likely for a high-income, childless couple where one spouse earns much more than the other.

2. Penalty likely for high-income spouses who earn equal amounts: Say a couple brings home $300,000 — with each earning $150,000 in wages. Again, they don’t have kids and they don’t itemize deductions.

They would pay an additional $3,807 in taxes as a married couple than they would have if they had remained single.

Why? They got pushed into a higher tax bracket. While the amount of income subject to the 10% and 15% tax brackets for joint filers is exactly double that for singles, that’s not the case for any of the higher brackets.

Consequently, even though their combined taxable income doesn’t change, about $40,000 of it will be taxed at 33% whereas when they were single, their individual top rates never exceeded 28%.

3. Penalty likely for equal-earning, low-income spouses with a child: The same problem exists for low-income couples but for a different reason: They’ll likely qualify for a smaller Earned Income Tax Credit, which is intended for working adults below a certain income.

Here’s how: Say each partner makes $15,000 for a total of $30,000. And say one of them has a child from a former marriage. As joint filers, their Earned Income Tax Credit would be about $1,018 less than if they each claimed it as an unmarried couple, the Tax Foundation estimates.

That’s because their combined income as a married couple pushes them into the EITC’s phase-out range for joint filers.

4. Not much change either way for some couples: The Tax Foundation found that couples with similar paychecks who together make between $40,000 and $150,000 likely won’t see much change in their combined tax burden.

That’s because their combined income won’t be taxed at a top rate higher than 25%, the same top rate each paid on their income when they were single.

To help figure out how your particular situation might turn out, you can use this marriage calculator from the Tax Policy center.

Brooklyn on Tech: Millennials Take Matters in Their Own Hands to Diversify Industry