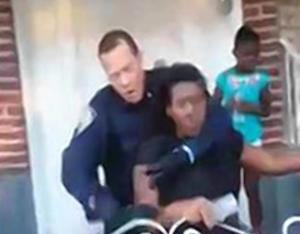 Twenty-seven-year-old Rosan Miller, who is seven-months-pregnant, is the latest NYPD chokehold victim since the death of Eric Garner.

According to the New York Daily News, Miller was with her family barbecuing in Brooklyn, when the police busted her for illegal grilling. The incident, which has been caught on film and photographed, made headlines July 28 after an East New York advocacy group (People Organizing and Working for Empowerment and Respect) fought for Miller during the NYPD investigation.

As you can see in the photo above, the police officer has the pregnant woman restricted by the neck, which is a clear violation of NYPD regulations. The Daily News reports that officers went to the Miller residence over the weekend because the family was grilling on a public sidewalk in violation of local law. A dispute between Miller and police broke out that ended with her, her brother, and husband all in handcuffs.

Charges for the family include obstruction of justice (husband, Moses), disorderly conduct (Rosan), and harassment and obstruction of justice (brother, John). Former city councilman Charles Barron told the Daily News that he expected police to “expedite” the Millers’ release, saying, “This was all over a grill. This is about grilling in front of her house.”

Barron also pointed out that Miller’s young daughter was prominently featured in the photo as her mother was being arrested. According to the former councilman, one of the cops, a lieutenant, arrived onto the scene at 594 Bradford Street, regarding a domestic incident involving another resident. The officer in question then returned to create the dispute about the grilling.

As the NYPD continues to double-down on its physical methods of torture, more and more victims are piling up in the wake of the July 17 death of Eric Garner, 43, of Staten Island.